Op Ed: The Totalitarianism of the Left

Ronald Reagan, in his 1964 speech “A Time for Choosing,” said “You and I are told increasingly that we have to choose between a left or right, but I would like to suggest that there is no such thing as a left or right. There is only an up or down — up to a man’s age-old dream, the ultimate in individual freedom consistent with law and order — or down to the ant heap of totalitarianism, and regardless of their sincerity, their humanitarian motives, those who would trade our freedom for security have embarked on this downward course.” This description of the political divide was entirely correct. The leading Democratic candidates are a reflection of this gravitational-like pull, both constant and exponential, towards totalitarianism. They call this fall towards totalitarianism being “progressive,” the issue is where they are progressing towards. Each Democratic candidate has fought to be the most “progressive” candidate. For example, recently Joe Biden claimed he had the most progressive record out of all the candidates running, Bernie Sanders responded: “I think if you look at Joe’s record and you look at my record, I don’t think there’s much question about who’s more progressive.” According to the Los Angeles Times, Elizabeth Warren, who has also been labeled the most progressive candidate, has overtaken Bernie Sanders in polling, with Joe Biden still in the lead. The role of government at its highest and most optimal level is to protect each individual’s life, liberty, and property. Despite this, these Democratic candidates want to extend the role of government to usurp each individual’s life, liberty, and property

Throughout the 20th century, multiple totalitarian regimes embraced eugenics, which is the evil belief that some populations are genetically inferior or superior, and this resulted in the loss of millions of innocent human lives. For example, during the 1930s and 1940s eugenics was used as a basis for the 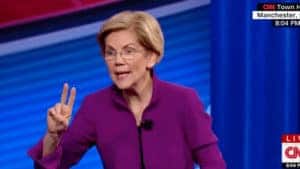 and the Ukrainian Genocide. During this time, eugenic principles spread to many countries and disgusting policies were created, such as forced sterilization and marriage prohibition. Eugenic principles are even seen today; in a New York Times interview with Supreme Court Justice Ruth Bader Ginsburg, she claimed the reason for federally permitted abortion was to limit “growth in populations that we don’t want to many of.” Cases like the legality of abortion illustrate the disregard for human life that is an inherent characteristic of a totalitarian regime. Life begins at conception, according to Princeton University, this is when a new human organism is created. This means that, by definition, abortion is ending the life of another individual. Ignoring this fact, every single Democratic candidate supports abortion, most support late-term abortion, and no Democratic candidate is against late-term abortion. A large part of their argument is that the government may not infringe on a “woman’s right to choose,” leaning on the idea that the government must protect their own liberty. This not only clashes with the government’s duty of protecting the life of the baby, but it also relies on the government allowing one individual to infringe on the liberty of another. An individual’s freedom cannot override another individual’s; there is no Venn diagram of liberty.

The boundaries of freedom end where another’s freedom begins. The fine line that defines the limits of liberty can be summed up in the expression “the right to swing my fist ends where your nose begins.” The issue of defining “liberty” and “rights” often is the core of many political issues because people often do not understand that “rights” and “liberty” are effectively synonymous. For example, the left commonly argues that universal healthcare is a “right,” but this argument completely forgets what “rights” are. The Bill of Rights were not rights granted from the government, they were boundaries set to fully restrict the power of government from certain areas. This is why terms like “Congress shall make no law” are used so often. In the healthcare scenario, the right to healthcare would require the government to provide this right, but the job of government would be to not stop an individual in getting healthcare, not provide it. Further, for the government to provide healthcare they would have to be providing the service of one individual, the doctor, as a right to another individual. The government cannot provide an individual’s service without effectively owning that individual’s labor, enslaving that individual through the involuntary enforcement of their provision of labor. The free market is built to be voluntary transactions between two parties, government intervention blocks voluntary transactions. A $15 an hour minimum wage, for example, blocks an employee from working for $14 an hour even if the employer cannot afford the $15 an hour. The result here is that the employee loses their job, the employer loses his ability to hire enough employees, the business fails, everybody loses. While there may be some people who benefit from the $15 an hour minimum wage, such as large companies like Amazon, who supports this legislation, it is at the expense of those who cannot afford it, like small business owners. There are two sides to every coin and policies like “universal healthcare” highlight one side and neglect the other.

If we own our labor then, by extension, we own the product of our labor. As Abraham Lincoln explains, “property is the fruit of labor,” and the government should be protecting property, not controlling it. The Democratic candidates believe they not only own an individual’s labor but that they believe they own what an individual earns from their labor. Many policies that these candidates push rely on the tyranny of the majority. They push unrealistic policies that would 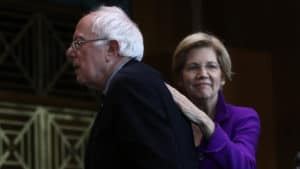 benefit the majority by dehumanizing the minority, stripping away their intrinsic human rights. For example, welfare programs are the forced confiscation of an individual’s property to be given to someone else. Socialist programs like these are the foundation of totalitarianism; they are seen in practically every authoritarian government. In order for social programs like this to work, there must be the presumption that the government owns the property of the individual. If the government can control an individual’s wealth, or property, to any degree, the government owns the wealth. Democratic candidate Bernie Sanders, for example, pushes a 90% tax on the upper class in order to distribute more wealth to the poor. If a 90% tax is allowed then there is no reason a 100% tax should not be allowed. The income tax, in general, requires the acceptance that the government can increase or decrease the amount of wealth it decides to take from the people. A 1% income tax requires the same argument as a 100% income tax, both are infringements on human rights. It does not matter that the politicians in government are elected; any government for a free people should not be able to confiscate the property of its citizens.

These Democratic candidates seek to exponentially centralize and strengthen the government. They show no regard for natural human rights or the boundaries of government. They preach that as our society evolves the Constitution needs to be reinterpreted as it changes with our society; this is a façade. These bureaucrats who operate on the idea of a “living and breathing” Constitution are just attempting to devalue the Constitution, so they can gain power. A Constitution that is not accepted as fixed and immutable is meaningless. The Constitution is a set of rules to bind the government within a sphere of power if the government gets to interpret those rules as loosely as it pleases then the rules are nothing more than a speed bump on the road to totalitarianism. Any Constitutionally questionable laws are cracks in the dam of the Constitution; each crack weakens it more and more until our freedoms are flooded by the tyranny of government. The Democratic candidates are trying to pull our country further down towards totalitarianism; no matter which of these candidates wins the primary, a vote for any of them is a vote for oppression and authoritarianism.

According to the Los Angeles Times, Biden remains in the lead with 22% of likely Democratic support; followed by Warren at 18% and Sanders at 17%.

Despite a growing American workforce with unemployment at levels not seen in more than half a century, Warren vowed to “remake” the US economy this week; suggesting a series of massive new proposals.

“As the 23 candidates seeking the Democratic nomination struggle to distinguish themselves, Senator Elizabeth Warren has set herself apart with a series of sweeping proposals that would significantly remake the American economy, covering everything from tax policy to student debt relief and offering a detailed portrait of what her presidency might look like,” reports the New York Times.

Senator Elizabeth Warren has laid out a series of policies that would significantly remake the American economy. Here's what that might look like.https://t.co/ADCUzMKSlo

“Many of the proposals from Ms. Warren, a former Harvard law professor and hawk on financial regulation, could face a difficult path to winning over moderates in a general election, and to gaining approval in Congress if she did take the White House. But the sheer volume of her plans, and their detail and variety, is forcing her rivals to play catch-up and stake out their own positions,” adds the Times.

Her proposals allow the federal government to monitor -and in some cases- dictate industry standards, salaries, bonuses, and more. She’s also called for the “break-up” of large technology companies, including Google and Amazon.

The 2020 hopeful was speaking at an MSNBC Town Hall event when she was asked to expand on her latest proposal to protect the environment.

“The thing is, you can’t just wave your arms. You’ve got to have a plan, and I do have a plan on this. Here’s how it starts: I’m going to make 1.2 million new jobs, new jobs that are good jobs, that are jobs in manufacturing, good union jobs,” said Warren.

“Here’s the idea behind it. Right now, we have a climate crisis, it threatens us all… That needs a lot of research, lot of innovation, and a lot manufacturing to push back against that,” she added.

“Democratic presidential candidate Elizabeth Warren proposed a universal child care plan that would limit American families’ expenses to 7 percent of income regardless of how many children they have in care — paid for by a tax on the ultra-wealthy,” writes Bloomberg.

Our kids are our future – but right now, we’re shortchanging them. Add your name to the petition: Every kid aged 0 to 5 in America should have access to high-quality, affordable child care and early learning. #UniversalChildCare https://t.co/zRPQmKAvYo

“Warren’s plan would cost taxpayers $70 billion per year, according to an analysis by Moody’s Analytics economists Mark Zandi and Sophia Koropeckyj,” adds the report.