Griffin smeared the Commander-in-Chief on social media just hours after the Trump administration deported a former Nazi prison guard to Germany, asking “If ICE is in the business of removing despicable Nazis can they please head over to the White House?”

If ICE is in the business of removing despicable Nazis can they please head over to the White House? https://t.co/FDEFDoTPqw

GRIFFIN DOWN: Kathy Griffin COLLAPSES on Stage During Comedy Show

Trump-hating comedian Kathy Griffin reportedly fainted during her live comedy show while performing in Dublin, Ireland this week; fueling speculation about the liberal comic’s health after a year of scandals and career setbacks.

According to Fox News, the 57-year-old comedian passed-out near the end of her nearly two-hour long show, telling the audience “I’m going down” before collapsing. Griffin’s longtime boyfriend rushed onto the stage and carried her off.

“I’m embarrassed more than anything. This one’s for you, Wendy Williams. Girl down. I had a girl-down moment,” she joked on social media, referring to Williams’ own on-air collapse late last month. “Anyway, the audience was fantastic, and thank you for being forgiving and understanding.”

“I promise to be upright the entire show next time,” she added.

Kathy Griffin made national headlines earlier this year when she posted images of herself holding Donald Trump’s “severed head” during a tasteless photoshoot widely condemned on both sides of the aisle.

The ensuing controversy cost the comedian an entire comedy tour, as well as her yearly gig as co-host of CNN’s New Year’s coverage.

Disgraced comedian Kathy Griffin returned to the national spotlight over the weekend, exploding on social media after police in Portland attempted to clamp-down on violent Antifa protests throughout the city.

“Oh, f*** off! Police in Portland, of all cities, siding with & protecting nazis ‘proud boys’ and ‘prayer…’ some s***. White America has to face the harsh reality that cops are largely racist. Yeah, I said it. The cops are fighting the actual Portlanders and calling them ‘antifa,’” she tweeted 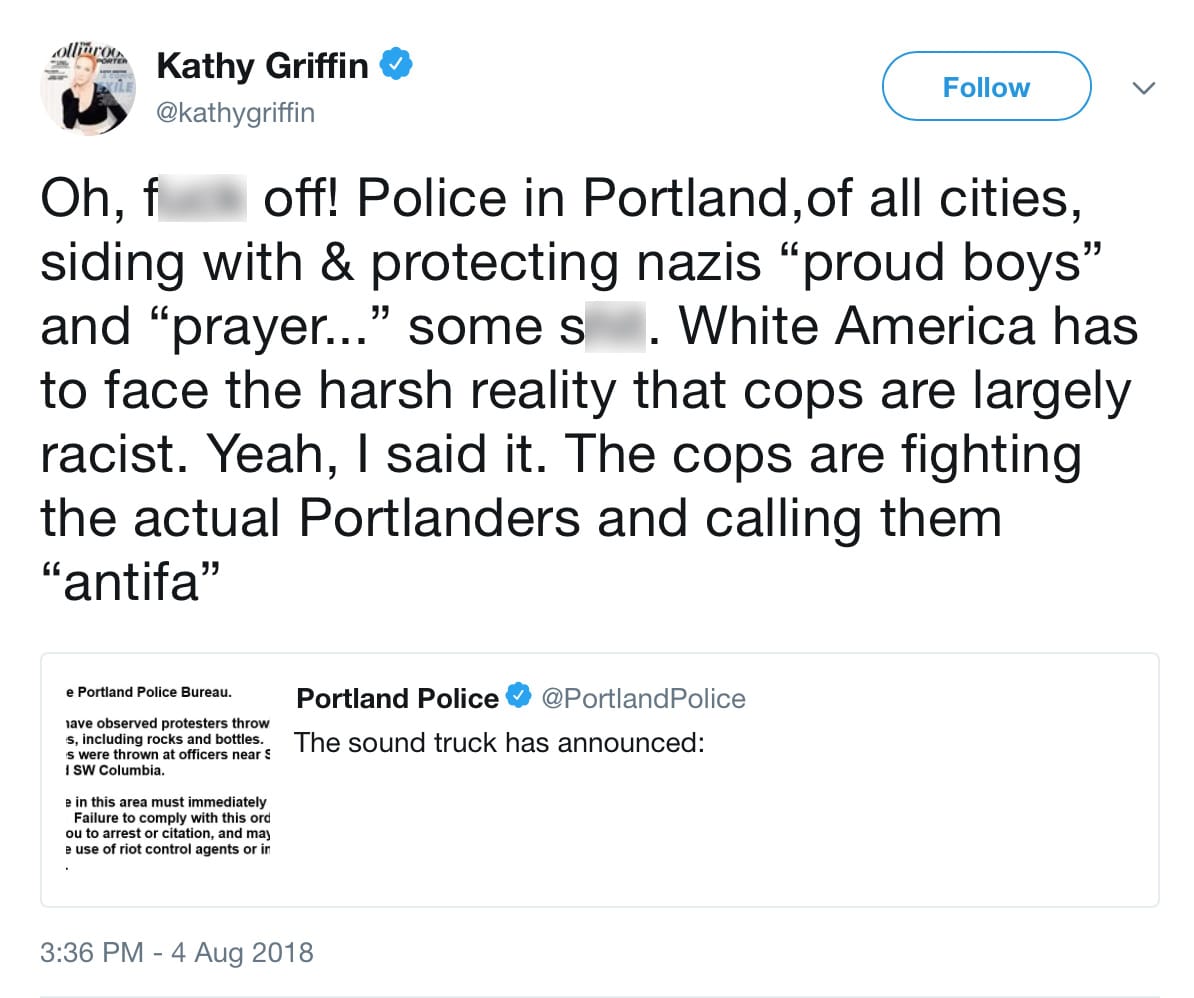 Griffin’s comments came under fire on social media within minutes, with users slamming the infamous comic for her all-out attack on President Trump, his supporters, and members of law enforcement.

“The next time you need police security, I hope someone shows them this tweet,” wrote one user.