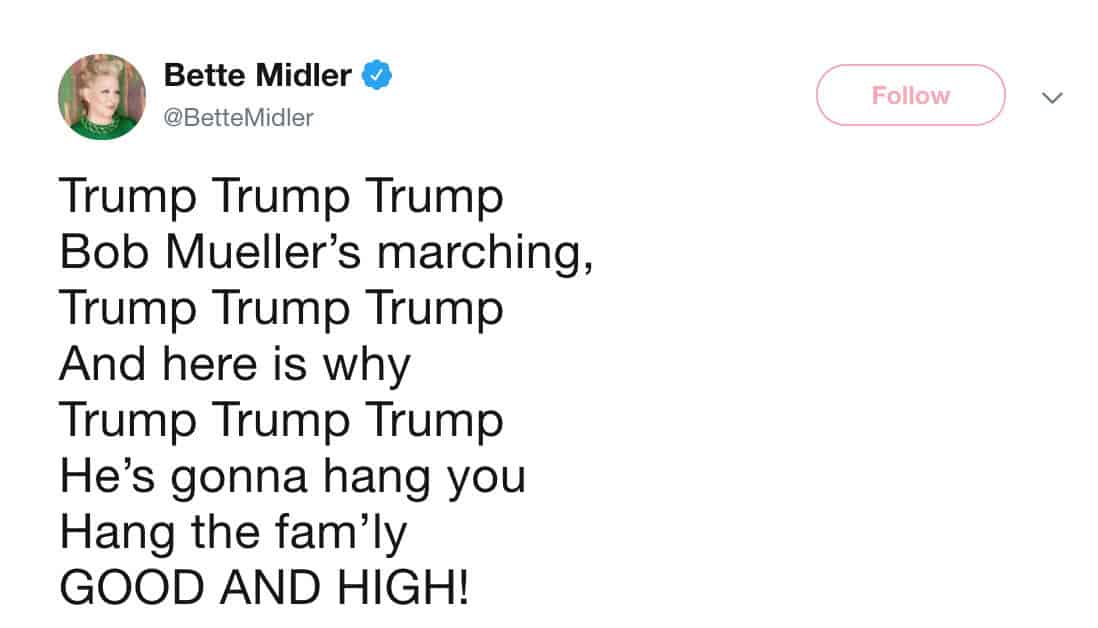 The 72-year-old star is no stranger when it comes to controversy; referring to President Trump as a “murderer” in recent months.

Famed musician and actress Bette Midler went berserk on GOP lawmakers and Mitch McConnell in particular Thursday afternoon; slamming the Republican leader after he offered “the prayers of the whole Senate” to those injured in Wednesday’s school shooting in Florida.

The A-list celebrity lashed-out at McConnell on twitter for his heartwarming comments, saying “F*** you & your worthless thoughts and prayers,” after accusing the GOP leadership of putting campaign donations over the lives of American students.

“F*** you & your worthless thoughts and prayers; you & your obfuscating shills got what you wanted, $$$, while our kids get to die in school,” she posted.

Midler was responding to a tweet from the Senate Majority Leader earlier in the day.

“Schools should be places where children can learn, and faculty and staff can work, without fear of violence. My colleagues from Florida will carry home the prayers of the whole Senate, for victims and their families, for the community of Parkland, and for the first responders,” he wrote.

Midler posted her incendiary tweet while Paul delivered his hours-long address to Congress, hoping to derail the bipartisan budget deal as it made its way towards the President’s desk.

“Where’s Rand Paul’s neighbor when we need him?” tweeted the music star, referring to Paul’s physical altercation with his neighbor earlier this year that broke six ribs and damaged his lungs.

Where’s Rand Paul’s neighbor when we need him?

The blowback on social media was immediate, with users pointing out Midler’s vicious attack on the GOP senator; saying “So much for love trumps hate…”

“I’ve loved Bette since I was a little kid- but this statement made me lose all respect for her,” wrote another user.

PALIN ON QUAKE: ‘Pray for Alaska, Our Family is Intact, Our House is Not’
Advertisement