When there is a nasty virus around, keeping your home clean is a better idea than it usually is. However, disinfecting every surface takes time. Too much time.

That is where ROCKUBOT comes in. This smart sterilizing robot rolls around your home, automatically killing germs using UV-C light. It sells for $159, but Hannity viewers can get it for $108.99 for a limited time.

Robot vacuum cleaners have been around for quite some time now, and that’s essentially the technology that the ROCKUBOT is based on. These vacuuming machines learn their way around your home and spend the day keeping the floor free of debris. The difference with the smart sterilizing robot is that it focuses on bacteria, viruses, and mites—essentially the dirt you can’t see.

As featured on Indiegogo and Kickstarter, the bot has powerful UV-C lights that operate at 4050μW/cm. This wavelength kills 99.99% of germs. At the same time, ROCKUBOT emits ultrasonic waves to disrupt mites lodged deep in carpets.

In automatic mode, the ROCKUBOT rolls around sterilizing the floor. Smart mapping allows the bot to navigate your home, while 24 sensors pick up obstacles and other hazards.

Need to sterilize something above floor height? This bot has you covered. You can pick up ROCKUBOT and switch to manual mode to use it as a handheld device. The device also has a built-in 5,000mAh battery that can charge your phone wirelessly, and it can play music via Bluetooth. ROCKUBOT is one seriously smart robot.

You would normally pay $159 for the musical version, but it’s currently just $108.99 with this deal. 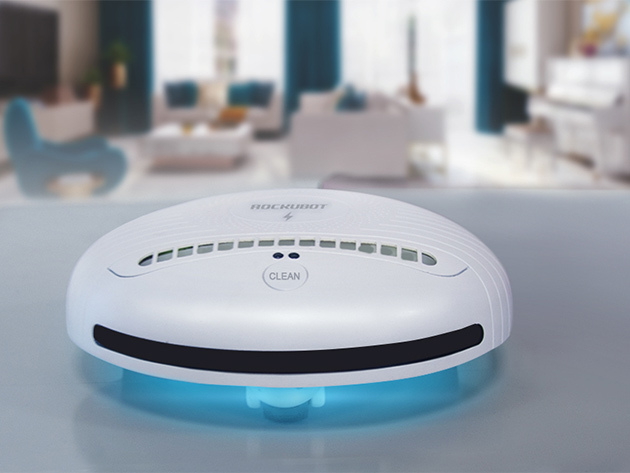 NEWSOM: California ‘First State to Mandate the Development of Proposals for Reparations’

California Governor Gavin Newsom confirmed Wednesday night that his administration is the “first in the nation” to create a new task force to study and develop proposals to institute racial reparations for historic slavery.

“CA just became the first state in the nation to mandate the study and development of proposals for reparations. Our past is one of slavery, racism, and injustice. Our systems were built to oppress people of color. It’s past time we acknowledge that,” posted Newsom on social media.

CA just became the first state in the nation to mandate the study and development of proposals for reparations.

Our past is one of slavery, racism, and injustice. Our systems were built to oppress people of color.

It’s past time we acknowledge that. https://t.co/sY8UWffqzt

“In a year of national protests against racial injustice, state lawmakers approved Assembly Bill 3121 to force the state to begin to confront its racist history and systemic disparities that persist today. Although California entered the Union as a ‘free state’ in 1850, slavery continued there after the state Constitution outlawed it the previous year. Slavery was abolished by the 13th Amendment to the U.S. Constitution in 1865,” writes the Los Angeles Times.

TRUMP in MINNESOTA: ‘Biden Will Turn Your State into a Refugee Camp’

President Trump stumped in Minnesota Wednesday night following his fiery debate in Cleveland; telling supporters Joe Biden has a plan to turn their state into a “refugee camp.”

“Joe Biden’s plan to inundate your state with a historic flood of refugees. Biden and Crazy Bernie Sanders have agreed on a manifesto… They pledged a 700% increase in refugees. Congratulations Minnesota,” said the President.

“What about Omar? Where she gets caught vote harvesting. What the hell is going on? I hope your US Attorney is involved. What is going on with Omar?” he asked. “Frankly, harvesting is terrible, but it’s the least of the things that she’s done. How did Minnesota elect her?”

Watch the President’s comments above.

‘SHOCKING REPORT’: 50% of Restaurants, Bars in NYC May ‘Close for Good’ After CoVID Shutdown
Advertisement