The Damasukasu Japanese 3-Piece Master Chef Hanshu Knife Set is a great option for any home chef. These handcrafted blades normally retail for $299, but Hannity viewers can get them for just $69.99 while they’re on price drop.

Because Japanese chefs need to prepare delicate meals such as sushi, they use different knives. Their blades tend to taper towards a sharper edge for better precision. The Hanshu Knife Set follows this trend. It contains three ultra-sharp chef’s knives: a 7-inch Nakiri vegetable knife, an 8.5-inch slicing knife, and a 5-inch utility knife.

Each knife has a 12-degree cutting angle and a full tang. They’re balanced, with grippy handles that make it easy to maintain complete control. The blade of each knife is made from carbon-rich steel that is nitrogen-cooled for better hardness and flexibility. These knives are actually graded at 62+ Rockwell hardness, which is extremely high.

The alloy metal is also stain and rust resistant. As an added bonus, the mix of materials creates a beautiful natural pattern on the surface of each blade. Just to add further to the aesthetics, the set is presented in a wooden box. 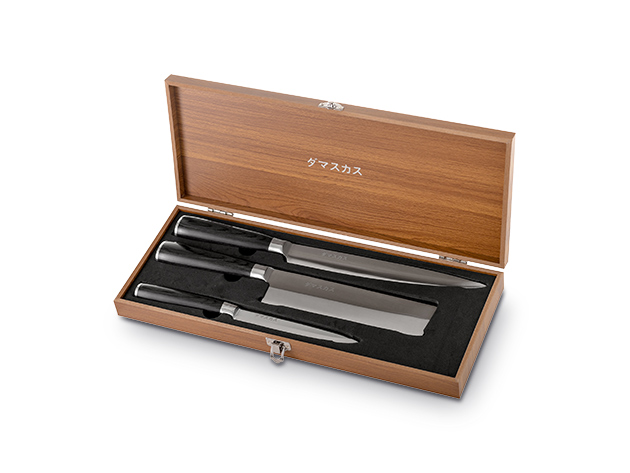 One Oregon woman showed incredible bravery we wished we saw more of during these tumultuous times. The unbelievable ordeal was caught on video. So unbelievable in fact, that critics believe the whole thing was staged or faked. The woman in the video, however, Kat Cast, defended herself on Facebook saying the incident “truly did happen and there is nothing fake about it.”

The video begins from inside a car pulling over and a woman, Cast, gets out with a gun while yelling “get on the floor. Get on the floor right now. Face down” to a young man who was on her property. He complies as she approaches him holding her gun, mostly behind her back and not pointed directly at him. “What are you doing on my property?” she asked. “Just passing through” he says, and she continues to question him.

“Did you light anything on fire?” she proceeded. “No Ma’am he answered.”  “What are you doing with those matches?” he responded that he smokes. “Where are your F***ing cigarettes” she asked, after which he admitted he didn’t have any. Cast held him at gunpoint until police arrived. Unlike Cast, many property owners have been unable to protect their lifelong investments and livelihood. In many large Democratic cities, the criminals are better protected than the citizens and business owners.

Thus far Cast has declined to speak further publicly about the incident except for her Facebook statement. “I will tell you something though if I need to do this again to protect my family and my neighbors, I will in a heartbeat do it again, except this time I will not be as nice as I was.”

Cast’s anger, concern and emotion is no surprise. Violence, crime, looting, executions of police officers are plaguing the nation, as well as wildfires spreading across the northwest. “The video came after weeks of devastating wildfires have raged up and down the West Coast. In Oregon, looters and thieves have compounded the tragedy as residents try to evacuate from active fire fronts and law enforcement staffing is already on short supply” reports Fox News.

A simple PSA to anti-law enforcement citizens in favor of defunding the police: who exactly would you call to defend your property in a similar situation?

BIDEN: ‘They Would, In Fact, Denied that Opportunity… Including Downriver Line of What Has to Be Done’

Joe Biden continued to confuse millions of viewers on CNN Thursday night; launching a baffling rant about supply chains, products ‘Made in America’, corporate jobs, and “downriver lines”… or something.

“They would in fact, denied that opportunity. I would also make it clear when you, in fact, It’s gotta be, if any of that is being purchased… It will, we will not… Including the downriver line of what has to be done… You can’t do what he’s doing now. You can’t do where, he’s giving tax breaks, and in fact, go overseas, bring there, and then import back!” said Biden.

Man, this guy is just so hard to follow pic.twitter.com/TR5VxX2AUp

“The chain is overseas, and they bring it back cheaper. So, I’m going to make sure that it’s made in America. I mean, and I believe that,” he added.

TRUMP on GINSBURG: ‘She Led an Amazing Life, She Was an Amazing Woman, I’m Saddened to Hear That’