You know, what really is amazing is the cheek of it all.

Take NBC’s Chuck Todd, the host of Meet the Press. Here is Mr. Todd pontificating on the unsurprising news that Sean Hannity – who has noted multiples of times on his radio show over the recent years that Trump lawyer Michael Cohen is indeed a Hannity friend (it helps to actually listen three hours a day) – has periodically talked about legal matters with his friend the lawyer. A newsflash that is about as stunning as the idea of heat in July. Who amongst us doesn’t have friends in profession X that we don’t occasionally speak to about a matter requiring thoughtful advice?

But in the drive to Get Trump – which, yes, is really what all the Get Hannity fuss is really about – the liberal media has worked itself into what can only be presented as lemming-like desire to swan dive off the professional cliff into the rocks of reality below.

Chuck Todd is a case in point. Here is Ole Chuck on the Hannity situation as reported by NPR’s David Folkenflik per Mediaite. Says an alarmed Chuck: “I am stunned that Fox had no punitive response. Not a ‘Sean Hannity must disclose every night,’ not a ‘he can’t cover this story,’ not a ‘he’s been suspended for a week,’ nothing! Not a single thing. They are saying this is okay for anybody that works at Fox News.”

Ok. Now hop in the time capsule and follow me back to February 12, 2017 on NBC’s Meet the Press. Of the several guests that day, one sticks out for a solo appearance. That would be former Virginia Senator Jim Webb – You can read the transcript here.

Webb had run briefly for the Democratic Presidential nomination in 2016 and made no headway, dropping out early, in 2015. What was so newsworthy that Webb was invited onto Meet the Press? Where the earlier guests of the morning had been two serious newsmakers of the moment – Trump senior policy advisor Stephen Miller and Vermont’s Democratic/Socialist Senator Bernie Sanders? 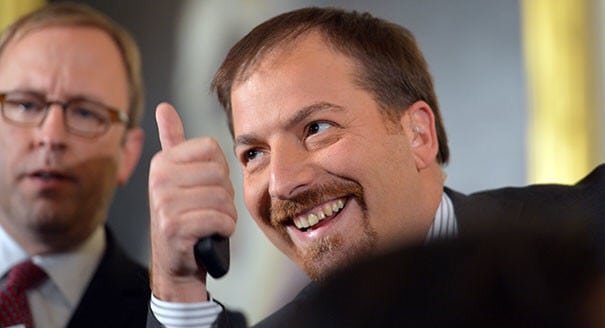 Well, Webb was talking about the exact same things he talked about in his failing presidential campaign. He thinks the Democrats are too liberal etc etc. There was zero news to be had here. The interview was just plain vanilla – unless one considered this question: What would move Chuck Todd to have Webb there in the first place?

The answer, one suspects, is to be found in something Chuck Todd never once said in the course of the interview. That would be this, as headlined at Politico three years earlier in 2014.

The story begins as follows:

“Kristian Denny Todd, the Democratic strategist and wife of “Meet The Press” moderator Chuck Todd, is working with former Sen. Jim Webb as he considers a 2016 presidential bid, a Webb spokesperson confirmed on Tuesday.

Todd previously served as the communications director for Webb’s 2006 Senate campaign in Virginia. She is not currently being paid by Webb’s office, according to spending reports for Webb’s political action committee.”

So at a minimum, Mrs. Todd was an unpaid advisor to Webb’s presidential campaign and at a maximum was his communications director for his 2006 Senate campaign, paid or unpaid we do not know. There was not a peep from Chuck Todd about this in his interview with Webb. Not…a …peep.

We do know as well that his wife is a longtime Democratic Party and progressive activist. Among others, according to NewsBusters, she contributed to Virginia’s Democratic Senator Tim Kaine. And what did NewsBusters report back there in October of 2016? Here’s the headline:

The story says, in part, this:

And of note? The February, 2017 show on which Webb appeared also had Bernie Sanders, and NewsBusters reported this in that same story about Todd’s wife, as mentioned in their headline:

“But Maverick Mail & Strategies, the firm Mrs. Todd founded in 2007 with fellow James Webb aides Steve Jarding and Jessica Vanden Berg, did heavy lifting for openly socialist Bernie Sanders for President this year. Open Secrets shows a bill for $1.992 million made in ten payments to Maverick from January to April. Todd has never disclosed this business relationship in 11 Sanders interviews this year. (If the work began in 2015 before the payments, Todd failed to disclose any tie in six Sanders interviews in the second half of 2015). We didn’t even count any Todd interviews with Sanders on MSNBC.”

The NewsBusters story concluded by saying of Todd interviews with Sanders that “there’s a significant conflict of interest that Todd and NBC News have never found necessary to mention. Transparency isn’t really in their interests here.”

And months after that NewsBusters story there is both Sanders and Webb on the same show – separately -with Chuck Todd and not a single word about his wife’s financial ties to either. Nor, when interviewing Tim Kaine, a peep about his wife’s donations there either.

“I am stunned that Fox had no punitive response. Not a ‘Sean Hannity must disclose every night,’ not a ‘he can’t cover this story,’ not a ‘he’s been suspended for a week,’ nothing! Not a single thing. They are saying this is okay for anybody that works at Fox News.”

Really? Really? What’s stunning here is the utter hypocrisy on display. There’s one standard for Hannity and Fox – but an entirely different standard for Chuck Todd and NBC News.

And rest assured – this hypocrisy isn’t limited to Chuck Todd and NBC News. As I have said, there is enough hypocrisy in the liberal media on matters like this to choke the entire field of horses in the Kentucky Derby.

Ya can’t make it up.

Just days after several news outlets were forced to “retract” multiple phony stories regarding President Trump and his relationship with Russia, MSNBC found itself in the hot-seat on Tuesday; “correcting” a bogus report about Trump’s lawyer and his “alleged call” for another special counsel.

MSNBC anchor and legal correspondent Ari Melber viciously attacked the President’s attorney on social media this week, saying Jay Sekulow had “crossed a line” in his calls for an investigation into Mueller’s months-long witch-hunt.

Citing alleged conflicts of interests, he says “New revelations require the appointment of a Special Counsel to investigate.”

Sekulow cites a Fox News report about alleged conflicts on special counsel team to say, “DOJ & FBI cannot ignore the multiple problems that have been created by these obvious conflicts of interests… revelations require the appointment of a Special Counsel to investigate.” https://t.co/HyIFMK1deu

Just spoke to Jay Sekulow who says, “This is about an alleged conflict regarding Fusion GPS and Bruce Orr, and it has nothing to do with Bob Mueller or Mueller’s team.” He stresses that was and remains his original point. https://t.co/Lqp3FEdP5M

One problem: Sekulow never cited Mueller as a factor behind his decision, instead saying there was a “conflict regarding Fusion GPS and Bruce Orr,” adding this “has nothing to do with Bob Mueller or Mueller’s team.”

“My concern from the outset has been that the whole Fusion GPS, Christopher Steele fake dossier was utilized to get FISA warrants. There’s indications that’s probably what happened,” Jay Sekulow told Sean Hannity. “That raised a very serious problem in our view. I thought as a lawyer that a special counsel needs to be appointed just to investigate these multiple conflicts of interest as it relates to the Fusion GPS – Bruce Orr situation.”

“This was a very clear statement, I was very specific […] I said please understand none of this is about Bob Mueller,” he added.

Listen to Sekulow set-the-record straight above.

NBC shocked users on social media on Sunday night, openly endorsing Oprah Winfrey for her possible presidential run in 2020 during its broadcast of the Golden Globe Awards; writing “nothing but respect” for the “future president” before being forced to delete the incendiary tweet.

The network posted the surprising message shortly after Winfrey accepted a lifetime achievement award, where she praised the media and told viewers that a “new day is on the horizon.”

“I want all the girls watching here to know that a new day is on the horizon! And when that new day finally dawns, it will be because of a lot of magnificent women,” said Oprah.

A short time later, NBC removed the public posting; saying the tweet was created by a third party hired by the network to cover the Hollywood award ceremony.

“Yesterday a tweet about the Golden Globes and Oprah Winfrey was sent by a third party agency for NBC Entertainment in real time during the broadcast. It is in reference to a joke made during the monologue and not meant to be a political statement. We have since removed the tweet,” posted the network.

Yesterday a tweet about the Golden Globes and Oprah Winfrey was sent by a third party agency for NBC Entertainment in real time during the broadcast. It is in reference to a joke made during the monologue and not meant to be a political statement. We have since removed the tweet.