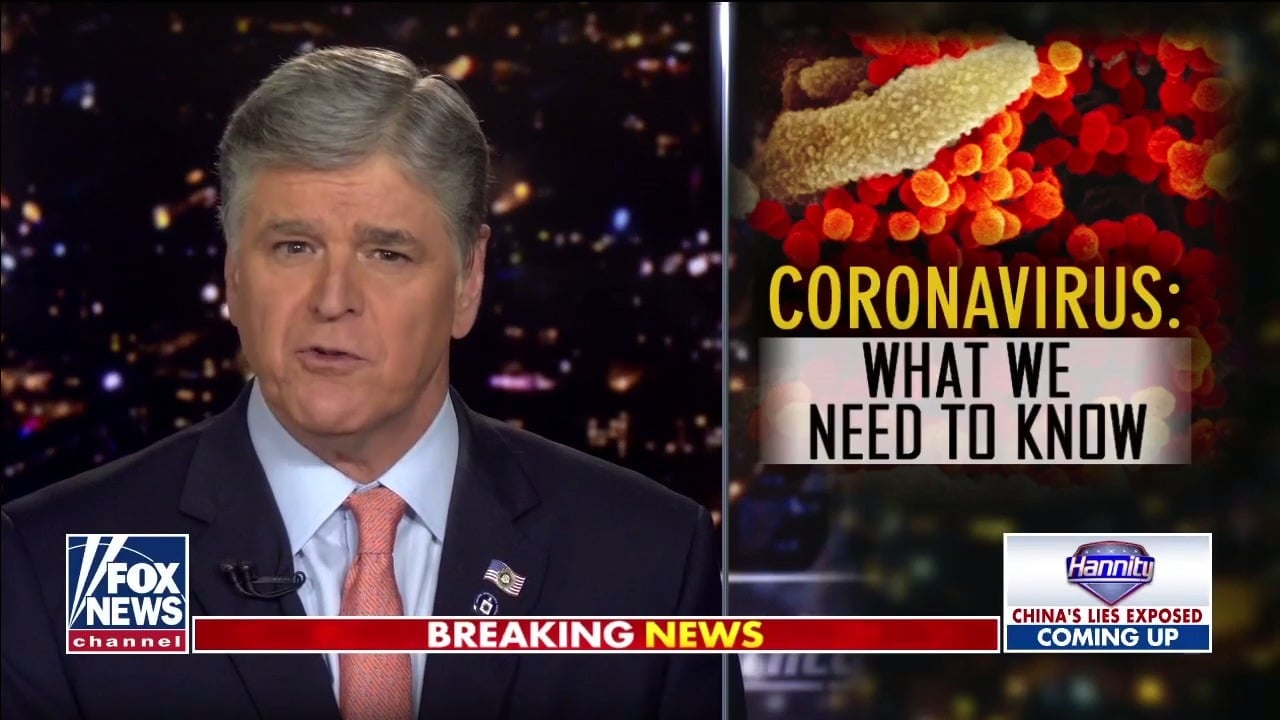 Today we have put together a timeline of the commentary on both the Hannity Radio and TV shows regarding COVID-19. While the MSM continues their pattern of false reporting and hateful narratives, the Sean Hannity Show has chosen to inform our audience with facts not fear. We believe in giving information, as it becomes available to us, to the American people. Below are just some of the examples from our shows over the past couple of months regarding the Coronavirus.

Remember this is the same MSM that brought you these headlines:

ALL BY HIMSELF: Jim Acosta Makes ‘Surprise’ Bookstore Appearance, No One Shows Up

MAXINE’S ADMISSION: Waters Says She ‘Doesn’t Have the Facts to Prove’ Russia-Collusion, But ‘Believes It!’

THIS IS REAL: Rashida Tlaib Says Her Young Son Her ‘Policy Advisor’ on Climate, Warns Apocalypse by 2030

A PLAN FOR THAT? Elizabeth Warren Unveils $1 TRILLION Plan to Fight ‘Environmental Racism’

THAT’S HER PLAN? Sen. Warren Vows to Use ‘Super Duper Enforcement’ to Implement her ‘Wealth Tax’

BERNIE on CORONAVIRUS: ‘Casualties May Be Even Higher Than What Armed Forces Experienced in WW II’

Vermont Senator Bernie Sanders weighed-in on the ongoing Coronavirus outbreak across the United States this week; telling reporters the “casualties” could be higher than what “the Armed Forces experienced” in the Second World War.

“In terms of potential deaths…the crisis we face is on a scale of a major war…we also have to face the truth and that is that the number of casualties may actually be even higher than what the armed forces experienced in World War II,” said Sanders during a press briefing on the virus.

"In terms of potential deaths…the crisis we face is on a scale of a major war…we also have to face the truth and that is that the number of casualties may actually be even higher than what the armed forces experienced in World War II." -Bernie Sanders pic.twitter.com/mMPbfcl2aT

President Trump addressed the nation from the Oval Office Wednesday night; saying it’s time for the American people to unify and combat the Coronavirus outbreak as “one family.”

“No nation is more prepared or more resilient than the United States. We have the best healthcare anywhere in the world. We are all in this together. We must put politics aside, stop the partisanship and unify together as one nation and one family,” said the President.

“History has proven time and time again, Americans always rise to the challenge and overcome adversity. Our future remains brighter than anyone can imagine,” he added.

President Trump: "We must put politics aside, stop the partisanship, and unify together as one nation and one family." #TrumpSpeech pic.twitter.com/leXtHIThkc

The global Coronavirus outbreak continued to have a major impact on the American economy and sporting world Thursday; with A-list actor Tom Hanks testing positive for the disease and the NBA suspending its entire season until further notice.

“Actor Tom Hanks, his wife Rita Wilson, they have tested positive for Coronavirus. They are in our prayers tonight,” said Hannity.

The President addressing the American public from the Oval Office Wednesday night; unveiling a series of new travel restrictions for all of Europe excluding the United Kingdom.

“This is the most aggressive and comprehensive effort to confront a foreign virus in modern history,” Trump said in an address to the nation. “I am confident by counting and continuing to take these measures we will significantly reduce the threat to our citizens and we will ultimately and expeditiously defeat this virus.”

San Francisco Mayor London Breed declared a citywide ‘State of Emergency’ Wednesday; calling her decision a pre-emptive measure to stop the deadly Coronavirus before it arrives on the West Coast.

“We see the virus spreading in new parts of the world every day, and we are taking the necessary steps to protect San Franciscans from harm,” Breed told reporters.

“It’s not a question of if this will happen but when this will happen and how many people in this country will have severe illnesses,” she added. “Disruption to everyday life might be severe.”

There are more than 80,000 confirmed cases around the world, with approximately 3,000 people killed from the deadly disease.