PENCE ON OFFENSE: "More jobs under Trump-Pence since May than all of Obama-Biden"

Last night on ‘Hannity’, Vice President Mike Pence switched into full campaign mode, armed with a list of achievements to brag about, spearheaded by economic wins since the coronavirus crisis crashed the administration’s earlier successes.

Topping Pence’s list is the strong jobs comeback — some 9.2 million since the pandemic hit the United States in March.

That number gave the vice president a new line to use against the new Democratic ticket of former Vice President Joe Biden and California Sen. Kamala Harris.

On Sean’s Fox TV show, Pence said, “We’ve already created more jobs in the last three months than Joe Biden and Barack Obama created in their eight years in office.” During the previous administration, some 8.9 million jobs were created. 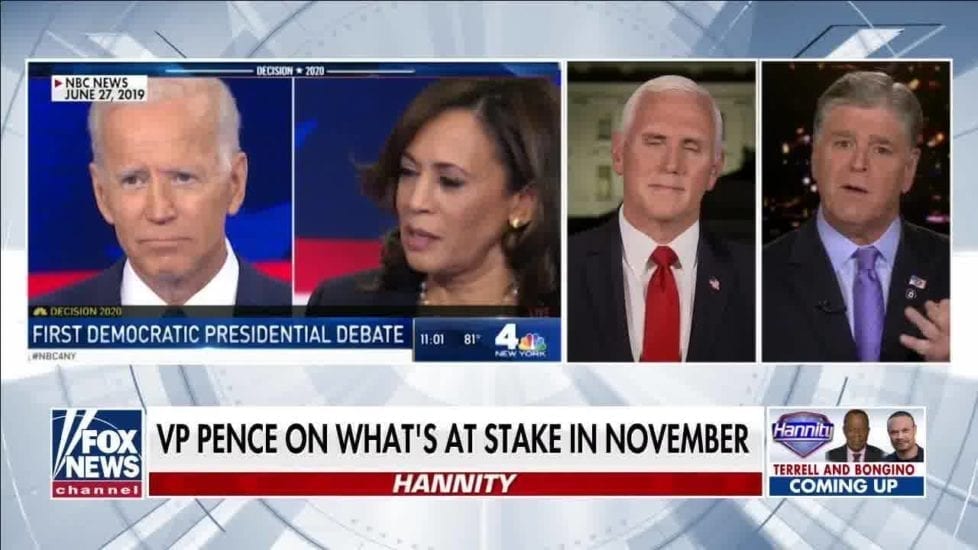 The pandemic cost some 20 million jobs, but many see the creation of nearly half of the loss as a major achievement and a path back to the record jobs that occurred under President Trump’s first three years in office.”

“The choice has never been clearer,” said the vice president, who closed with some fighting words:

The comic’s intolerant rant began after ‘The View’ played a clip of former White House adviser Omarosa Manigault Newman discussing the Vice President’s faith, where she baselessly claimed on reality television that “Jesus tells him to say things.”

“He’s not very popular at all,” said cohost Sunny Hostin. “I think when you have a Mike Pence who now sort of puts this religious veneer on things and calls people ‘values voters,’ I think we’re in a dangerous situation.”

“It’s one thing to talk to Jesus. It’s another thing when Jesus talks to you,” added Behar. “That’s called mental illness if I’m not correct, he’s hearing voices.”

GAME OVER: Pence CALLS OUT NFL During Fiery CPAC Speech

Vice President Mike Pence delivered a fiery speech before the 2018 Conservative Political Action Conference -commonly referred to as CPAC- Thursday morning, saying 2017 was the “most consequential year” for the conservative moment and blasting the NFL after months of players disrespecting the national anthem.

The crowd immediately broke out in applause, with CPAC audience members chanting U-S-A after the Vice President’s not-so-subtle jab at the NFL.

The President has been an outspoken critic of the National Football League; urging a nationwide boycott after “disgraceful” players repeatedly “took a knee” during the performance of the US national anthem.

Watch the Vice President’s comments below: