Hannity: Why CNN won't highlight progress in the fight against COVID

For those who have been lucky enough to keep their jobs during coronavirus these past five months, they still struggle to maneuver through what their position looks like during a pandemic. But what about those whose jobs are directly related to a pandemic? Turns out the very people who are supposed to figure out how to keep us safe and healthy during a pandemic are leaving their positions in drones.

According to the Associated Press, “dozens of state and local public health officials around the U.S. have resigned or have been fired amid the coronavirus outbreak.” It is a consequence of the individuals being “vilified, threatened with violence and in some cases suffering from burnout” which is “a testament to how politically combustible masks, lockdowns, and infection data have become.”

Just last week, New York City’s health commissioner was replaced “after months of friction with the Police Department and City Hall.” CEO of the National Association of County and City Health Officials, Lori Tremmel Freeman, says the “departures are making a bad situation worse.” “We’re moving at breakneck speed here to stop a pandemic, and you can’t afford to hit the pause button and say, ‘We’re going to change the leadership around here and we’ll get back to you after we hire somebody,” said Freeman. 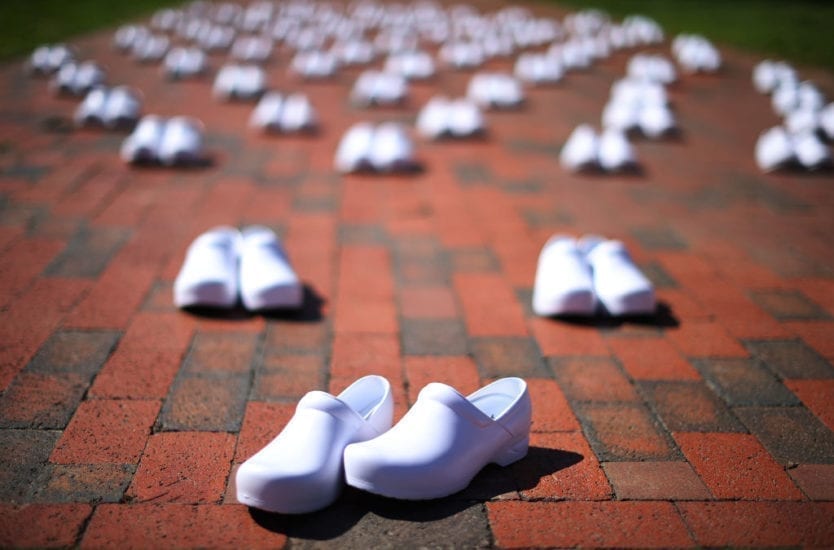 Freeman stated the firings and resignations have in large part been due to conflicts over mask orders or social distancing shutdowns. “It’s not a health divide; it’s a political divide,” said Freeman, referring to those who argue that masks and social distancing are unnecessary. In what is being described as a pressure-cooker environment, “Public health leaders from Dr. Anthony Fauci down to officials in small communities have reported death threats and intimidation.”

“Some have seen their home addresses published or have been attacked on social media” reported the AP. In Ohio, state health director Amy Acton resigned in June after mounting pressure. Acton advised Governor Mike DeWine to shut down schools statewide, and she also shut down the presidential primary in March just “hours before” polls were to open. Acton said Republican lawmakers tried to strip her of her authority and armed protesters showed up at her house.

The Associated Press found that “at least 48 state and local public health leaders have resigned, retired or been fired since April across 23 states.” Additionally, that list “has grown by more than 20 people since the AP and KHN started keeping track in June.” KHN, also known as Kaiser Health News, along with the AP, released an analysis finding “since 2010, spending on state public health departments has dropped 16% per capita, and the amount devoted to local health departments has fallen 18%.”

Additionally, “at least 38,000 state and local public health jobs have disappeared since the 2008 recession, leaving a skeletal workforce for what was once viewed as one of the world’s top public health systems.” The question is, is this a money problem or a people problem? It doesn’t seem like money will help these individuals put their pride and egos aside and get along better.

As the nation comes together in extraordinary ways to battle COVID-19, Nine Line Apparel is proud to announce its “Masks for Heroes” initiative – a campaign to donate their new American-made protective masks to those in the healthcare, first responder and military communities.

As a US based veteran-owned manufacturer, Nine Line recently joined the fight to solve the country’s critical shortage of Personal Protection Equipment (PPE) and began shipping their first protective masks to consumers.

Their Homeland AMPP Mask (standing for American Made Personal Protection) is a patent-pending, injection molded, reusable protective mask, and comes with a 10pk of pre-cut, replaceable filter material.

“Three short weeks ago, our coalition had an idea and the motivation to make a difference,” says Tyler Merritt, founder and CEO of Nine Line Apparel. “We’ve invested millions of dollars toward the accelerated development and testing of this mask system, and we’re excited to finally get it into the hands of those in need.”

Now, with the first production run of masks complete, Nine Line has pledged to donate one mask for each one purchased on their website to these service sectors in need.

“This giveback initiative is a way for us to show appreciation for their tireless efforts,” says Chief Marketing Officer Rich Caponi. “Starting today, with every mask purchased on our website, we will donate a mask to a frontline hero in need – with a goal of donating 1,000 masks in the next two weeks.”

Merritt and the team are in the process of applying for expedited FDA approval to validate the efficacy of their mask and filtration system. He believes that the Homeland AMPP Mask is a “better solution than any of the other non-FDA approved devices currently flooding the market with false claims of effectiveness.” Merritt continues, “I’m sending this to my mom who is a nurse on the front lines and we’ve put our heart and soul into doing this the right way – teaming with leading engineers, filtration experts, and health care professionals to develop a rapidly scalable American made solution. I hope we (as a country) learn from this and never outsource the manufacturing of PPE ever again.”

Merritt & his team believe that the Homeland AMPP Mask is the sustainable, scalable, American made solution to the United States’ reliance on foreign-produced PPE.

To learn more, or to purchase a mask and support the Masks for Heroes campaign, visit www.ninelineapparel.com.

“We have to make sure we have enough PPP, those protective gear for this!” said the Democratic frontrunner.