Liberal legislators and members of the Congressional Black Caucus were caught-red handed this week; reading and playing video games on their mobile phones while President Trump delivered his first State of the Union address to the American people.

Images first surfaced on the internet of Michigan Rep. Brenda Lawrence typing-away on her smart phone as the Commander-in-Chief outlined his vision for 2018 and beyond.

Upon further inspection, the photos showed Rep. Lawrence playing popular web-based game Candy Crush in the middle of the address. 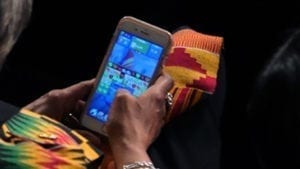 “That State of the Union is put out an hour in advance so Democrats and Republicans can read along,” a spokesperson for one of the legislators told the Daily Mail.

“And while the speech was going on, she was putting together a statement in response.”

While it’s not uncommon for lawmakers to use their smart phones to tweet, email, exchange texts, and read-along during the normally 90-minute long speech, playing teenaged video games is certainly a new low.

President Trump delivered his first ever State of the Union address Tuesday night, calling on both parties to unite and touting a strong economic message to the American people; predictably prompting only one-side of the packed chamber to rise to their feet.

Liberal legislators led an all-night sit-in against the Commander-in-Chief, refusing to rise after the President cited record-low unemployment for African-Americans, unprecedented job growth, the defeat of ISIS, a booming stock market, and all-out patriotism.

Watch the hilarious video above.

The liberal legislator was speaking on the Senate floor Tuesday afternoon when he called on the President to “admit” that “he inherited the healthy economy” from his predecessor; adding much of the strong economic recovery was “created by President Obama’s policies.”

“The president will be eager to defend the accomplishments of his nascent administration and take credit for a healthy American economy, pointing to low employment, job growth, and a soaring stock market,” Schumer said. “But the truth is these trends were present before Donald Trump took office.”

ARMAGEDDON? US Economy to GROW 5.4% in FIRST QUARTER
Advertisement