This 3-in-1 Wireless Charger Also Works as a Phone Stand: Now 35% off

It’s pretty common nowadays to carry around a smartphone, wireless earbuds, and a smartwatch. It’s also just as common to carry separate charging cables for all three devices. Wouldn’t it be neat if you could power up all three with the same wireless charger?

With the MagStack Foldable 3-in-1 Wireless Charging Station, you can. Optimized for Apple devices, this space-saving accessory can handle three devices at the same time — and double as a pop-up stand. In a special Hannity deal, you can get it today for just $44.99, which is 35% off MSRP.

Carrying around multiple chargers has always been annoying. But as the number of wireless devices we own increases, the problem keeps getting worse. Instead of filling your bag with plugs and cable, slipping a MagStack into your bag or pocket is a much better idea. In fact, this nifty charger mimics the design of a wallet, folding flat for storage.

In this configuration, one Qi wireless charging pad is visible. You can easily stand the charger down on any flat surface and place your Qi-compatible device on top. If you need more charging places, you simply unfold MagStack until you have three pads in a row. One of the pads is specifically designed to mimic the MagSafe charger for Apple Watch, although it can be used for phones, earbuds, and other devices.

In addition, you can fold MagStack into a self-supporting triangle. In this position, it becomes the perfect charging stand for your smartwatch or a place to prop up your phone during video calls. 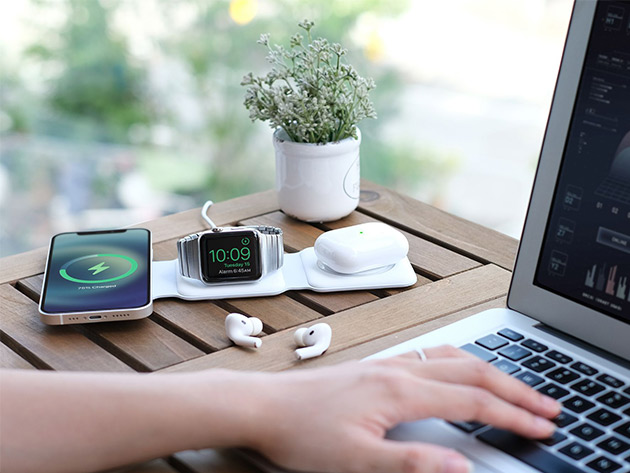