SPECIAL COUNSEL: What Does it Really Cost?

The appointment of special counsel is nothing new. The first such occurrence was at the hands of Ulysses S. Grant in 1875 to investigate the Whiskey Ring scandal, a situation in which whiskey distillers were said to have bribed government officials to have the tax on barreled whiskey cut in half. As most things political go, the investigation ran into turmoil when the special counsel began asking questions about President Grant’s meddling in the investigation. Sound familiar? Ultimately, the special investigator, a name used interchangeably for special counsel today, was fired and later replaced under political pressure.

In more recent years, special counsel has been used to investigate Watergate under Nixon, The Iran-Contra Affair under Reagan, Whitewater under Bill and Hillary Clinton (remember Kenneth Starr?), and Monica Lewinski also under Bill Clinton. Now Robert Mueller is investigating President Trump.  The assignment of a special counsel generally comes during turmoil and often adds to the controversy. In all things political, one should expect the motive of those who push for assignment of special counselors to be driven to soil the reputation of those at the heart of the investigation. Think of it as a political tool used to cloud the minds of voters. The very fact that a special counsel was appointed can be enough to raise doubts. Those driving the appointment of the special counsel will make sure the need for this action not be forgotten in the next election cycle. It all seems to boil down to a political game.

Being keenly interested in all things financial, it doesn’t take us long to get to a couple of our favorite questions. How much does it cost? And, who pays the bill? Interestingly enough, the special counsel doesn’t require special funding from Congress. The funding is built into the congressional budget, so if you were really wondering, the citizens pick up the tab. That’s right, a political game funded by taxpayer dollars. Shocker! 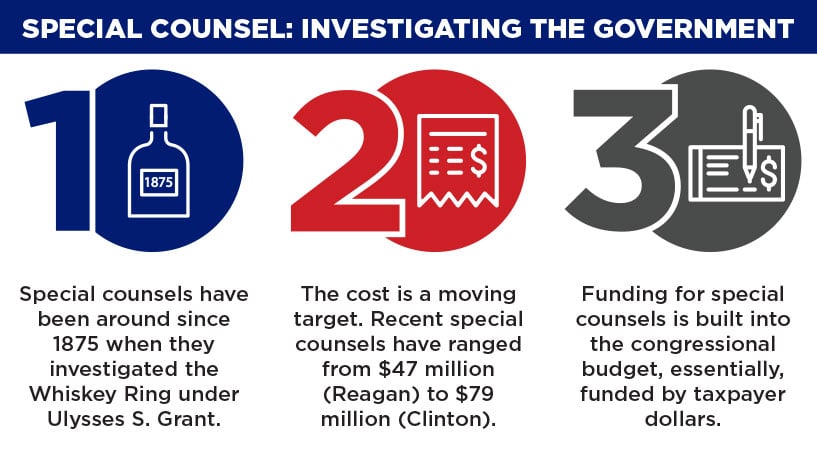 The more important question is, how much? That’s a moving target. It has been said, the many investigations into Bill Clinton’s foolishness are said to have ultimately cost the taxpayers about $79 million to investigate. The investigation into the Iran-Contra Affair reportedly cost around $47 million. Mueller’s current investigation into alleged Russian collusion has reportedly racked up a price tag of $6.7 million in its first five months according to Justice Department figures. Assuming the cost is uniform throughout that investigation, that amount should be about $13.4 million by now.

What expenses are covered in these calculations, you might ask? The cost of salaries, travel, rent, supplies, government agencies and agents, and any needed help from private contractors.

So, what is the taxpayers’ likely return on this investment? Not much. When Bill Clinton was impeached by The House of Representatives after the investigation into Whitewater, the U.S. Senate later acquitted him, and he finished his term. Some of the individual players in the current investigation have already been charged with wrongdoing, but these charges do not appear to be on the level of a smoking gun against President Trump. These things take time and time is money! Mr. Mueller was expected to finish his probe within nine to 12 months. He was appointed in May of 2017. It’s March now, so that’s 10 months by our count, and the meter is still running.

TARIFFS and DUMPING: What You Need To Know

Will Trump’s proposed changes to tariffs and dumping impact you? In the short run, it will not. Besides scary headlines and threatening words from pundits, politicians, and leaders all over the world about a “trade war,” nothing is going to happen tomorrow. I tend to be a free trade guy, meaning I believe everyone in the world should be able to produce the goods they want and sell them across all borders at the best price possible. This sounds good when everyone is playing by the same rules. If you have one producer getting subsidized to help them produce the good cheaper, then the playing field is no longer fair.

This is what has allegedly been happening with China and others when discussing steel and aluminum imports. It has made it impossible for our domestic manufacturers to compete. The tariffs will bring the cost in line with reality and help our domestic production.

The long-term issue—the fact that steel and aluminum are going to cost more—means the input cost to make a beer can or car is going to go up. That means either the producer of those products will have to eat the additional costs thereby lowering their profits or pass along the cost to you the consumer, which means less money for you to spend on other things. Additionally, if a trade war breaks out then it will be bad for everyone as costs will increase across the board. I do not see that happening at this point, but one can never know.

What is the President thinking? To be honest, unless you are one of his family members or close personal friends, I doubt very seriously that anyone knows what he is thinking on any issue. I am hoping he is using this opportunity as a negotiating tactic to cut a better deal on NAFTA (North American Free Trade Agreement), to start pushing back on China and their trade practices, which in a lot of ways hurts manufacturing at home, and lastly to make sure our national security is protected. The United States cannot rely on other countries to produce essential items, such as steel and aluminum, during times of conflict. We must protect ourselves.

I will end on this note: The President is doing exactly what he said would during the campaign. Right or wrong, we elected him, and he is doing what he said he would do on tariffs.

Larry Kudlow is in as Director of the National Economic Council after Gary Cohn’s resignation. The outgoing Director was a huge advocate for tax reform and has been credited, to some degree, with getting that job done late last year.

Larry Kudlow is no stranger to politics. After getting an early start by campaigning for a Democrat—yes, a Democrat—Joseph Duffey along with the likes of Bill Clinton in 1970, Larry’s economic education kicked in winning him over to conservative causes. His work as associate director for economics and planning at the Office of Management and Budget in the early 1980s under the Reagan administration seemed to signal his official change of political persuasion to conservative Republican.

In recent years, Kudlow has been an advocate for conservative causes like lower taxes and supply-side economics. He is also a staunch advocate for fair dealing and outspoken against corporate corruption, making this clear in his criticism of Enron and WorldCom management scandals.

In contrasting the two, Larry Kudlow is no stranger to government or politics while Cohn had a successful career in the financial industry before accepting the job in the Trump administration. Cohn’s demeanor, that of a Wall Street trader, is reportedly a bit harsher and strategic, while Kudlow is revered by peers for his principals and ability to get along even while disagreeing. Both Kudlow and Cohn have openly disagreed with Donald Trump’s tariffs. It’s hard to find an economist who likes a tariff. However, his open disagreement shows Kudlow is not a “Yes Man,” even though he is still willing to take the position.