**SENATORS USE THE PLATFORM TO FURTHER THEIR TRUMP HATING NARRATIVE

**IF PAUL RYAN WANTS TO LEAVE, WHAT’S THE HOLD-UP? MAYBE HE SHOULD LEAVE NOW

4:05 PM ET – Senator Rand Paul of Kentucky is outraged at the current political spectrum. We are at the lowest of the low, and the persistent determination of the media, anti-Trumpers, and Democrats have run their course.

Two romantically involved FBI officials who were removed from special counsel Robert Mueller’s team over a series of anti-Trump text messages still have Top Secret security clearances, Sen. Rand Paul revealed Wednesday. Paul tweeted a letter he had sent the FBI in January asking whether Strzok and Page still had security clearances and whether they are able to “search FISA data or other classified databases”. In late March, the FBI responded to the Kentucky Republican.

“All FBI employees must maintain a Top Secret security clearance,” wrote Gregory Brower, then assistant director of the FBI Office of Congressional Affairs. “Because of security concerns and law enforcement sensitivities, the FBI does not reveal the specific accesses granted to particular employees.” 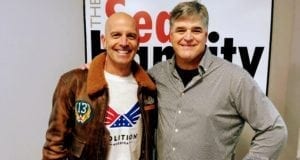 4:30 PM ET – Major Dan Rooney heads up Folds of Honor, he is a Fighter Pilot, PGA Professional, Patriotic Philanthropist and Author, A Patriot’s Calling: Living Life Between Fear and Faith. Today he tells us about the awesome partnership he has with Budweiser and helping the families of veterans.

An American hero. Major Dan “Noonan” Rooney is a fighter pilot with 3 combat tours in Iraq, a PGA Golf Professional, and the founder of the Folds of Honor. He has served as the motivational speaker for two U.S Ryder Cup teams and is a FOX News contributor. A decorated military aviator, Major Rooney is currently stationed at Tyndall AFB Florida as a member of 301st Fighter Squadron.

Since 2007, the Folds of Honor has carried forth this singular, noble mission. To provide educational scholarships to spouses and children of America’s fallen and disabled service-members. Our motto says it best. Honor Their Sacrifice. Educate Their Legacy.

5:05 PM ET – Sally Kohn, one of the leading progressive voices in America today. The author of THE OPPOSITE OF HATE and host of STATE OF RESISTANCE podcast, her book is out this week, and she stops by to debate Sean and discuss the issues. From Amazon on the book:

Sally Kohn has a talent for making friends across the political aisle. While establishing herself as a leading progressive voice as a commentator on Fox News, she went head-to-head with her colleagues on divisive issues, engaging in heated arguments but also developing unexpected friendships. But since the 2016 election and the epidemic of hate that surrounded it, Kohn began to wonder: Where did all this hate come from and how can we get beyond it? 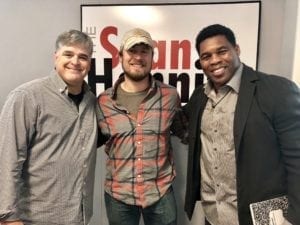 5:30 PM ET – Herschel Walker – former NFL player for the Minnesota Vikings, Philadelphia Eagles, and New York Giants (as well as a former bobsledder, sprinter, and mixed martial artist) joins the show to discuss his advocacy work for the U.S. Military and first responders.

He recently partnered with Rocky Ridge Trucks who launched a giveaway contest that awarded a hand-painted, completely American-made 2018 Chevrolet Silverado 1500 – worth $80,000 – to U.S. veteran, Brian Jason, who is also joining the show.