OP-ED: In Georgia, Unsigned Absentee Ballots, Shown on Video adds to the Stench of Election Corruption

When major metro areas in  six swing states announced  a “stop count”  order a little after 11 PM on Election Night,  as President Trump cruised to an electoral landslide,  a stench suddenly permeated the air in Arizona, Nevada, Michigan, Wisconsin, Pennsylvania, and Georgia.

Fulton County, Georgia, surrounding Metro Atlanta, joined the vote-stop party with a sketchy excuse for stopping. County election officials blamed a “water leak” in the State Farm Arena, which later proved to be a lie.

After Fulton’s “bad plumbing” ruse, someone told Republican poll workers, “No more counting until the morning.”

Everybody left the Arena.

Late last week, shocking security video from State Farm Arena showed four Fulton County employees remaining behind. When the dust settled, they removed hidden suitcases filled with ballots from under a long, black table, and resumed counting, as fast as they could go, for two long hours.

The eager-beaver vote-counters probably forgot about security cameras in the ceiling.

To quote the great philosopher Forrest Gump, “stupid is as stupid does.”

As it turns out, vote-counter Ruby is a publicity ham, helping shed light, perhaps unknowingly, on the dirty Fulton fiasco.

For example, on November 3rd, Ruby posted a photo from the front page of the Metro Section of the Atlanta Journal-Constitution dated November 2nd,  featuring a photograph of her daughter Shaye, with Ruby adding, “Look at my baby giving the look to those employees. Mommy is so proud of you. Supervisor of Registration.”

A screenshot, courtesy of reporter Carolyn Ryan, who Ruby granted an interview before reneging, is shown below: 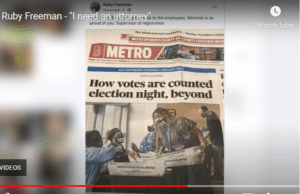 Here, we see Ms. Moss’s photograph, with Ruby’s “proud of you” commentary below: 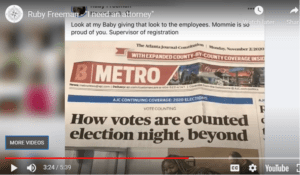 Next, we see an isolated camera shot, apparently of Ruby Freeman and her daughter, left behind to count ballots after someone lied to Republican poll workers that counting had ended for the night.

Ruby posted her own photo on her Facebook page on Election Day, wearing the same shirt which appears to be shown in the security video of the secret count party, with Ruby shown below on the right:

As it turns out, courtesy of excellent investigating by Ms. Ryan, Ruby Freeman is an outspoken Trump-hater. Consider some of her public Facebook posts both prior to and after the election.

In one post-election Facebook post, dated November 7th, she says in part, “Watch out for president-elect Joe Biden coming at you from all channels of the United States of America ….  if you see number 45 (referring to President Trump our 45th president) tell him the stage left and exit.” 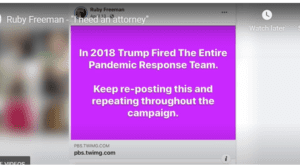 In other words, vote-counter Ruby wants Trump to step aside, perhaps to avoid election challenges.

In another post, back on April 13, in an anti-Trump Facebook message claiming Trump had “Fired The Entire Pandemic Response Team,” vote-counter Ruby urges her friends to “keep reposting throughout the campaign.”

A screenshot is included below: 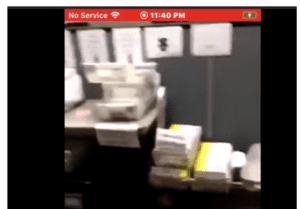 So, in April 2020, Ruby Freeman, who later counted ballots in the secret Election Night spree, actively campaigned against the President.

However, Ruby’s postings did not stop there.

At some point before Election Night, she recorded a video tour inside the Fulton County Elections Headquarters, showing compromised absentee ballots. Ruby’s new video is as shocking as the suitcases-full-of-ballots Election Night video.

Before discussing Ruby’s new video, remember this:  Georgia law requires tight security around absentee ballots to prevent election fraud. A tight chain-of-custody prevents ballot tampering, and above all,  the absentee ballot envelopes must be signed by the voter.

Next, she enters a room and shows absentee ballot boxes, all unguarded and unsecured.

Note the yellow strips on the left of the ballots, which we’ll see up-close in a second.

At the 55-second mark, she shows more absentee ballot envelopes, unguarded and unsecure, without signatures, postmarks, or return addresses. Again, note the yellow.

About the 1:18 mark, she sees a man and asks, “Sir, can I have some work?” As will be seen, she requests absentee ballots to “process.”

Here’s the screenshot, showing 387 absentee ballots in that bin.

Here we see the second bin slipped beside the first one. The unsigned cover sheet entitled “Ballot Signature Verification” has been removed and placed on the top.

Note the yellow on the left side of the envelope, with no return address, and no postmark. In other words, Illegal absentee ballots.

Then the view switches to a computer screen.

Around the 2:15 mark, Ruby says, “y’all see all this I gotta do? I gotta do all this. Enter all these absentee ballots.”

These envelopes, with no signature as required by Georgia law for absentee ballots, not to mention no postmarks, no return addresses, and no chain-of-custody, are all illegal, invalidating all those ballots that Ruby was about to enter. This is how they run elections in Fulton County, Georgia’s most populated county – sloppy, totally disregarding the law.

To be fair, poor Ruby Freeman did not mastermind all this. We don’t accuse her of lying to the Republican observers or telling them to leave because ballots would not be counted until the morning.  But somebody lied. Somebody in Fulton County lied to the media about the water leak on Election Night, but probably not Ruby. Lying to the media about “water leaks” exceeds Ruby’s pay grade.  She’s probably a nice lady if you got to know her.

But in her zeal to show others what she knows, Ruby reveals Fulton County’s illegal ballot operation from behind the scenes and unknowingly does the country a favor.

That Governor Kemp would oppose an emergency measure calling the Georgia legislature into session is incomprehensible. In the face of all this, Kemp’s insistence upon sending Biden electors to the Electoral College raises more questions about his affiliation with Dominion during his tenure as Secretary of State (2010 – 2018).

Maybe someone should ask Kemp about his dealings with Kay Stimson, Dominion’s Vice President for Governmental Affairs, who previously served as spokesperson for the National Association of Secretaries of State (NASS) while Kemp was Georgia’s Secretary of State.

The Constitution grants the Georgia legislature, not Kemp or any other Governor, the power to correct the problem by selecting Trump electors to the Electoral College.

To republican state legislators reading this, in Georgia, or any of the six swing states, you took an oath to defend the Constitution.

Will you place your political fortunes and desire for comfort above your love of country and your oath to the Constitution?  Yes, you’ll get merciless criticism by the leftist media if you act. You might be doxed. Loud radicals in the street might shake angry fists in the air and chant and scream your name.  Maybe you lose your next election. Maybe not.

But you know what happened here. Everybody knows.

Will you sacrifice the Republic for personal gain or temporary comfort?

Will you stand as a profile in courage or wilt under cacophonous threats from the Constitution’s enemies?

Unlike American Marines at Iwo Jima or American Soldiers at Normandy, you will not risk live bullets from the enemy.

Don Brown, a former U.S. Navy JAG officer, is the author of the book “Travesty of Justice: The Shocking Prosecution of Lieutenant Clint Lorance” and “CALL SIGN EXTORTION 17: The Shootdown of SEAL Team Six.”  He is one of four former JAG officers serving on the Lorance legal team. Lorance was pardoned by President Trump in November of 2019.  Brown is also a former military prosecutor, and a former Special Assistant United States Attorney.  He can be reached at donbrownbooks@gmail.com and on twitter @donbrownbooks

60% of the POPULATION? Biden Says ‘200 Million People’ Have Died in the US from CoVID

Former Vice President Joe Biden continued to baffle millions of Americans Sunday when discussing the Coronavirus pandemic in the country; falsely asserting “200 million people” have died in the USA from CoVID-19.

“It’s estimated that 200 million people will die, probably by the time I finish this talk,” said Biden.

Joe Biden: “It’s estimated that 200 million people will die, probably by the time I finish this talk.”

Nearly one million people have died from CoVID-19 around the world since the outbreak began earlier this year; including 200,000 in the United States.

AXELROD ON BIDEN: ‘He Either Can Cut It, Or He Can’t’

Democratic strategist David Axelrod weighed-in Thursday on Joe Biden’s potentially reduced campaign schedule; saying “this is bad advice” and claiming the former Vice President can “either cut it or he can’t.”

“This is bad advice. You can’t cloister the candidate and win. He either can cut it or he can’t, and the only way he can prove he can is to be an active and vigorous candidate. He’s running for president of the United States, for God’s sake!” posted Axelrod on social media.

This is bad advice. You can’t cloister the candidate and win.
He either can cut it or he can’t, and the only way he can prove he can is to be an active and vigorous candidate.
He’s running for president of the United States, for God’s sake!https://t.co/SCZmqVYapF

Allies and political insiders close to Joe Biden are reportedly telling the former Vice President to scale back his campaign stops and speaking events; hoping the reduced schedule will minimize future speaking gaffes.

“Allies to Joe Biden have been floating the idea of altering the former vice president’s schedule in an effort to reduce the gaffes he has made in recent days,” reports The Hill. “The allies, growing increasingly nervous about Biden’s verbal flubs, have said it’s an approach that’s been suggested to campaign officials on the heels of the former vice president’s stumbles.”

“He needs to be a strong force on the campaign trail, but he also has to pace himself,” said one insider.

“I think you’ll see the same schedule and maybe even more Joe Biden,” one ally said. “Everyone wants to see Joe Biden be Joe Biden. If he’s held back in any way, that’s almost the antithesis of who he is.”

“I think it’s the wrong approach,” they added.

“Joe Biden has spoken his mind his entire life, which voters know and love about him,” said Biden’s deputy campaign manager. “He’s a real person, he’s authentic, and that will never change. He’s going to keep taking on Trump and making the case to voters about the stakes we face in this election, regardless of how the press chooses to cover him.”