The 2018 midterm elections are just weeks away and the deadline for voter registration is ending Tuesday in many states. Don’t miss out on your opportunity to take part in what is shaping up to be one of the most important American elections in generations.

While some states across the country allow residents to register as late as Election Day; Tuesday October 9th is the last opportunity to sign-up in Arizona, Arkansas, Florida, Georgia, Hawaii, Illinois, Indiana, Kentucky, Louisiana, Michigan, New Mexico, and more.

Check the map below to find out the deadline in your state, Register at Vote.gov. 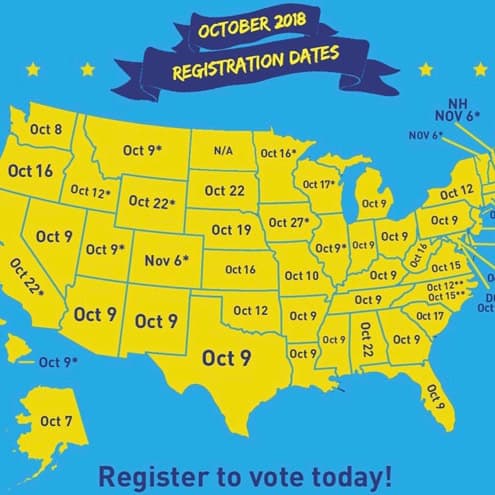 Voter registration deadlines across the US.

The US economy continued to roar to life in July under President Trump and the GOP-controlled Congress, with new data showing nearly three million Americans have left the nation’s food stamp program since the President’s inauguration in January 2017.

According to the new statistics released by the Department of Agriculture, over 2.8 million people dropped the program since Trump took office; fulfilling a signature campaign promise to boost Obama’s stagnant recovery.

Millions drop off of ‘SNAP’ under Trump pic.twitter.com/CAjXVgtzTA

The strong economic data -coupled with 4.1% growth in GDP in the second quarter of 2018- may spell disaster for Democrats heading into the midterm elections; with House Minority Leader Nancy Pelosi pledging to “repeal” the widely popular “GOP tax scam.”

The US economy continued to smash records and surpass expectations in September, with new data showing the American unemployment rate at a half-century low and the Dow Jones Industrial Average reaching an all-time high.

“The Dow Jones Industrial Average hit its first record high since January on Thursday as gains in Apple and a decrease in trade fears lifted the 30-stock index… The Nasdaq Composite also rose 0.5 percent,” writes CNBC.

The stunning economic data may spell disaster for Democrats hoping to retake Congress this fall, with House Minority Leader Nancy Pelosi vowing to repeal the ‘GOP Tax Scam’ should her party win big during the midterm elections.

Read the full report at CNBC.