Italy is known both for great coffee and great design. So it’s inevitable that one of the best espresso makers in the world comes from an Italian designer.

Created by Michele de Lucchi, the Alessi Pulcina 3-Cup Espresso Maker looks amazing and delivers excellent flavor. It’s normally priced at $120, but Hannity viewers can get it today for just $49.99 in a special deal.

If you haven’t heard of Michele de Lucchi, it’s definitely worth taking a look at his work. This renowned Italian architect and furniture designer typically uses eye-catching shapes and colors, without compromising on functionality.

The Alessi Pulcina is a fine example. Created in partnership with illycaffé, this beautiful espresso maker is made from stepped waves of aluminum. The curves are mesmerizing, and they contrast nicely with the red handle and lid knob.

These design choices are not purely for the sake of pleasing aesthetics. For instance, the delicate spout is shaped so coffee doesn’t drip when you finish pouring.

In addition, the Pulcina won’t actually allow you to drink bad-tasting coffee. The boiler automatically stops dispensing coffee when the liquid inside gets hot enough to burn the beans. This means you won’t ever experience a bitter aftertaste.

This handsome kitchen accessory is a must-have for an espresso aficionado, and it’s currently 58% off MSRP at just $49.99. 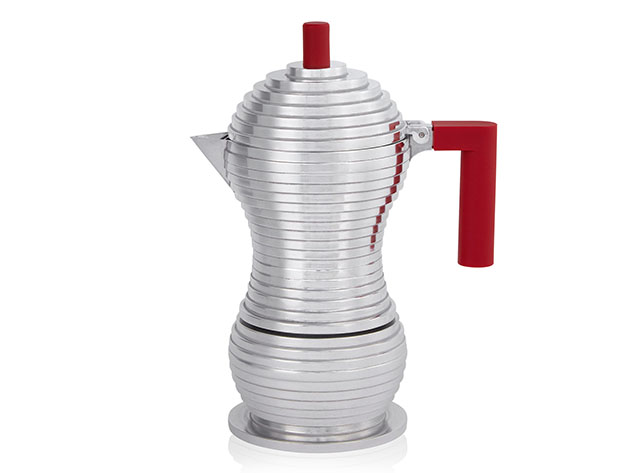 But, his advisers and lawmakers are placing their bets now. Sources familiar with the matter are confident that their prediction will, in fact, become a reality.

According to sources close to the president, via Politico, Trump is expected to select Amy Coney Barrett to fill the vacant seat.

A judge on the Chicago-based 7th Circuit Court of Appeals, Barrett has long been viewed as the frontrunning candidate for the position, due to her strong conservative values. The devout Catholic and mother of seven emerged as the top pick on Trump’s shortlist, just days following Ginsburg’s death. At 48, Barrett would be the youngest Supreme Court nominee since Clarence Thomas in 1991 and could serve well into the middle of the century, according to ABC News.

While one source, a senior Republican official, said the president indicated he’d made his decision, another source said that Trump has still indicated some “flexibility,” according to Politico.

Despite Trump’s vow to select a woman to fill RBG’s vacant seat, Democrats are still infuriated by the notion that the Senate very well may vote a new Justice to the Court before the election. During the Obama-administration, Sen. Mitch McConnell refused to vote on Obama’s nominee, Merrick Garland, because it was an election year. Now, Republicans are eager to vote on Trump’s.

McConnell says that this year is a whole different scenario; Republicans hold the White House and the Senate, which was not the case in 2016.

For Democrats, Barrett’s conservative tilt and Catholic roots made her approval to the federal bench in 2017 a bitter experience, according to ABC.

So, it can be expected that Supreme Court approval will face the same reaction from the left.

Whether Barrett or someone else, the Senate Judiciary Committee is looking to hold confirmation hearings the week of October 12. Senate Republicans want to confirm the 9th justice before the election, in the event the Supreme Court has to step in to decide the results, according to Politico.

“The big progressive corporations donating to BLM should instead be spending their money helping black families rebuild from these horrible left-wing riots,” said the President. “Wealthy liberal hypocrites want to defund police in our inner-cities while living behind walled compounds.”

“If anything every happened they’d be the first to go. They’re fools. They want to get rid of school choice,” he added.

"The big progressive corporations donating to BLM should instead be spending their money helping black families rebuild from these horrible left-wing riots. " pic.twitter.com/HZKGHn3wND

Watch the President’s comments above.