CNN White House correspondent April Ryan was forced to issue a correction to an earlier report Tuesday after she falsely claimed President Trump was booed at today’s Patriot’s event at the White House.

Ryan initially reported that the President was loudly “heckled and booed” at the rally scheduled to replace the NFL’s Philadelphia Eagle’s welcoming ceremony, when in fact it was Trump’s heckler who was loudly rejected.

The President himself was warmly received by the crowd of spectators. 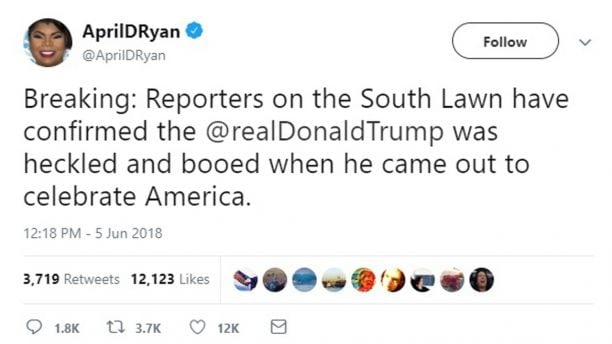 “Breaking: reporters are rewatching the event and found a heckler in the crowd started asking questions of @realDonaldTrump and the heckler was booed. The heckler was escorted out of the event. The booes were for the heckler,” she later tweeted.

“The original breaking boo tweet was deleted as reporters on the South Lawn who told of the booign and heckling did not see all of what happened on the other side of the lawn. After the tape was watched the heckler was booed not @realDonaldTrump,” she added.

The original breaking boo tweet was deleted as reporters on the South Lawn who told of the booign and heckling did not see all of what happened on the other side of the lawn. After the tape was watched the heckler was booed not @realDonaldTrump

“The President said yesterday he was complying, they turned over a million documents. If he was complying with the investigation why was there a search warrant?” asked Ryan.

“With all of this turmoil, particularly this last week, has the President at any time thought about stepping down, before or now?” pressed the CNN White House correspondent.

“No, and I think that’s an absolutely ridiculous question,” concluded the Press Secretary.

Sanders was fielding questions from reporters when Ryan repeatedly badgered the Secretary on whether the President was willing to backtrack on his position regarding player protests at the NFL.

"Is the president aware that this is about police-involved shootings, and not about disrespecting the flag?" April Ryan asks in contentious exchange.

"The president has made his position crystal clear on this topic," Press Sec. Sanders replies. "He not going to waver on that." pic.twitter.com/yKRLY7AITX

“I let you rudely interrupt me and your colleague, I’m going to ask that you allow me to finish my answer. I’d be happy to answer if you stop talking long enough to let me do that,” fired back Sanders.

Watch the explosive exchange above.