A reporter with the Washington Post and CNN political analyst raised eyebrows on social media Wednesday night; posting -then deleting- a tweet wishing everyone a “Merry Impeachmas from the WaPo team!” 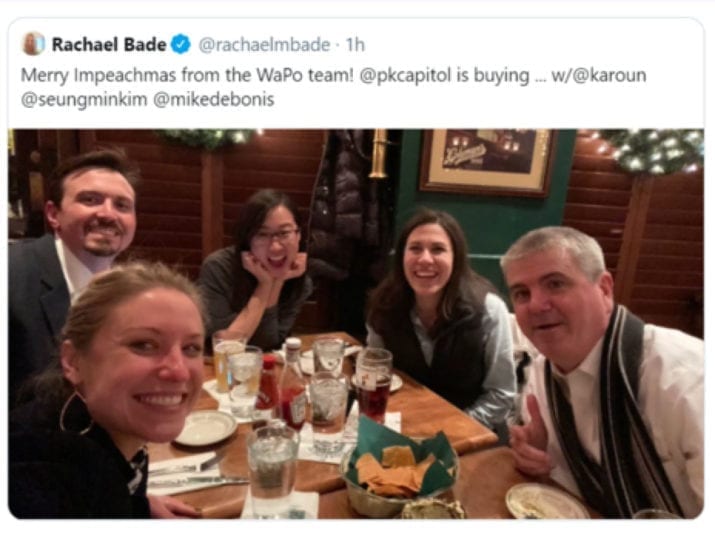 The reporter posted a tacit apology shortly after, writing “I’m deleting a tweeting tonight that is being misinterpreted by some as an endorsement of some kind. To be absolutely clear, we at the Post are merely glad we are getting a break for the holidays after a long 3 months. I will retweet the group photo w/ a better caption!”

I’m deleting a tweeting tonight that is being misinterpreted by some as an endorsement of some kind. To be absolutely clear, we at the Post are merely glad we are getting a break for the holidays after a long 3 months. I will retweet the group photo w/ a better caption !

The comment came hours after the House of Representatives formally Impeached President Trump on two charges: Obstruction of Congress and Abuse of Power.

“It’s inconceivable to me that it would be 67 votes to remove the president from office,” McConnell told reporters during the third day of the public impeachment inquiry.

Sen. Mitch McConnell: "It's inconceivable to me that it would be 67 votes to remove the president from office." pic.twitter.com/KeSKGWzhW7

“I can’t imagine a scenario under which President Trump would be removed from office with 67 votes in the Senate,” McConnell told USA Today.

“Nothing is happening because House Democrats seized with Trump derangement syndrome are consumed with this argument with the president,” he said.

McConnell made similar comments last week; telling reporters “I will say I’m pretty sure how it’s likely to end. If it were today, I don’t think there’s any question it would not lead to a removal.”

Meanwhile, House Democrats refuse to commit to a formal timeline of their investigation into the President’s dealings with Ukraine.

“I haven’t had a lot of time to pay attention to the president’s tweets and the legal implications of them. I just think that was totally wrong and inappropriate and typical of the president,” Pelosi told CBS News.

“I have no idea,” she responded when asked if the process could drag-on into 2020.

Senate Majority Leader Mitch McConnell rejected an initial offer from Sen. Chuck Schumer Tuesday regarding his requests for a potential impeachment trial in the Senate; calling his proposal a “fishing expedition.”

“The Senate Democratic leader would apparently like our chamber to do House Democrats’ homework for them. He wants to volunteer the Senate’s time and energy on a fishing expedition,” McConnell said.

“McConnell’s comments are the first time he’s responded to Schumer’s offer, sent on Sunday night, which outlined Democrats’ opening proposal on how to handle the Senate’s looming impeachment trial,” reports The Hill.

“The preferable path would have been an in-person conversation, which none the less, I still hope to pursue,” McConnell added.

Senate Mitch McConnell dismisses Sen. Chuck Schumer's proposal to call live witnesses: "Those who have been eagerly hoping for impeachment are starting to scramble." https://t.co/gZeA2x1TQ9 pic.twitter.com/HrwZFbhn7E

DOUG COLLINS: ‘We’ve Know This Day Would Occur Since January’