This Wearable Device Prevents Back Pain by Correcting Your Posture

According to a nationwide survey, more than half of adults suffer from back pain. There are many causes, but bad posture is one of the most common.

If you are one of those adults, Albaro Air could be the solution. This wearable posture corrector keeps your spine aligned to prevent pain and help train you to hold a better posture when you’re not wearing the Albaro. The device retails for $120, but Hannity viewers can get it today for just $99.99.

Posture correctors work by guiding your spine into a more natural shape. Most are designed to be used on a chair, but Albaro Air is designed to be worn like a super-thin backpack.

This means you feel the positive effects throughout the day, whether you are seated or standing. It’s a great way to fix back, neck, and shoulder pain and other symptoms of poor posture, such as breathing problems.

Being very light, the device is surprisingly comfortable to wear, and it’s the only posture corrector that provides personalized spinal support with its air cell technology; rather than heavy metal or plastic, your back is supported by small cells filled with air. Using a patented ergonomically-designed air pressure cell to fit your unique body, it adjusts the air pressure and creates the most comfortable back support while effectively realigning your balance

In addition, the back panel has an air mesh design to prevent a nasty build-up of sweat. Just as importantly, Albaro Air is made to last. The shoulder straps have double stitching to survive daily use, while a neoprene band keeps the whole thing locked in place.

Albaro Air raised over $249k in crowdfunding on Kickstarter and Indiegogo, so you’ll be in good company when you grab the device today for $99.99. It’s available in five different adjustable sizes, from small (23″-27″) to extra-extra large (40″-44″). 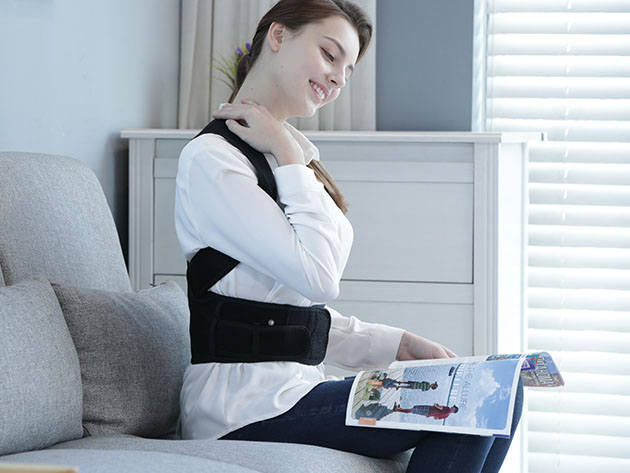 So-called ‘Squad Member’ Rep. Rashida Tlaib viciously attacked President Trump Friday after learning of his CoVID diagnosis; saying he “only cares about himself” and promotes “deadly lies” to the American people.

“He still won’t wear a mask. He only cares about himself and his life, NOT those around him or the people he took an oath to protect. Too many lives lost because of his deadly lies,” Tlaib wrote.

He still won't wear a mask.

He only cares about himself and his life, NOT those around him or the people he took an oath to protect.

Too many lives lost because of his deadly lies.

Speaker of the House Nancy Pelosi also weighed-in Friday on the President’s positive diagnosis for CoVID-19; saying his behavior was a “brazen invitation for something like this to happen.”

“I always pray for the president’s family, that they’re safe. I know he’ll have the best of care,” said Pelosi. “Going into crowds unmasked and all the rest was sort of a brazen invitation for something like this to happen.”

"Going into crowds unmasked and all the rest was sort of a brazen invitation for something like this to happen."@SpeakerPelosi discusses @realDonaldTrumps positive COVID-19 test. pic.twitter.com/rG04vVaMXA

“It might be a learning experience,” she added. “This is tragic. It’s very sad.”

Senator Ted Cruz ripped into CNN’s Chris Cuomo Thursday over his vicious attacks against the President; saying his entire network is simply obsessed with “talking about how much they hate Donald Trump.”

“Our priority needs to be opening up the economy, bringing jobs back, sending kids back to school. We’ve had an enormous economic impact from this pandemic,” said Cruz. “Joe Biden’s policy don’t work and hurt a lot of people.”

BREAKING: Trump Campaign Confirms All Scheduled Events Will be ‘Postponed or Going Virtual’