The Ultimate Home Workout Kit: Get 5 Resistance Bands for Under $40

When you think about strength training, you might picture a gym full of weights. But what about working out at home?

Resistance bands allow you to target every major muscle group, and they take up far less space than a set of dumbbells would. They’re also much more affordable. GearPride Resistance Bands are some of the best around, and Hannity viewers can pick up a set today for just $39.99.

While free weights certainly have their purpose, staying strong isn’t all about lifting heavy. Resistance bands provide the same time-under-tension style of strength training, with less chance of injury and less intimidation factor. They also happen to be much more convenient (and in stock!) than dumbbells.

This set from GearPride includes five bands, each offering a different level of resistance. You also get a door anchor, foam handles, and ankle straps to provide you with a ton of options for your workout routine and keep both your brain and your muscles from getting bored.

There are many ways to use the bands: attach them to the door anchor, trap them under your foot and pull upwards, and so on. Using various techniques, you can work your arms, shoulders, legs, and core muscles.

The level of resistance ranges from the yellow band, which offers 10 pounds of resistance, up to the black band, which is rated at 30 pounds. Want to train even harder? You can always combine multiple bands for an extreme workout. Just as importantly, you can pack this kit and exercise almost anywhere.

The GearPride Resistance Bands: Workout from Home Kit is usually priced at $46. But with the current deal, Hannity viewers can get it now for just $39.99. 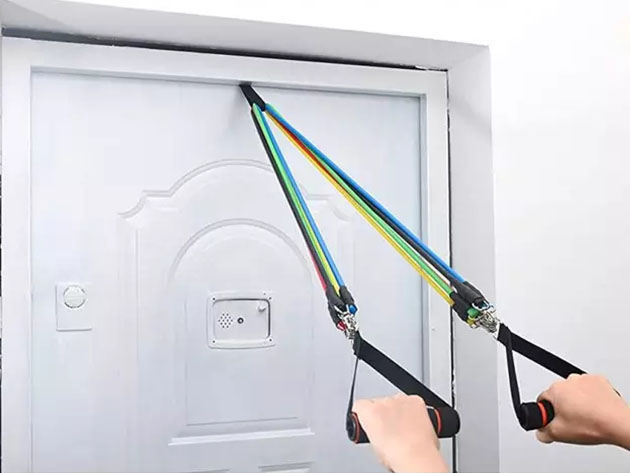 The NBA continued to hemorrhage fans over the weekend when their final championship series was viewed by roughly 5 million Americans each night; the lowest recorded since the association started keeping track back in 1994.

The TV ratings for game three of the NBA Finals hit another record low Sunday night. The game averaged fewer than 4.4 million viewers.

The numbers are pathetic. This is what happens when you make sports political. People quit watching.

“The number is down 45 percent from last year’s Game 1 between the Golden State Warriors and Toronto Raptors, which had 13.51 million viewers. This is the fourth straight year Game 1 viewership has gone down compared to the previous season,” reports Yahoo Sports.

Former Vice President Joe Biden urged Donald Trump to impose a “mask mandate nationwide” this week; adding he should also regulate “interstate travel” to slow the spread of the disease.

“My prayers continue to be with the President and the First Lady, for their health and safety. I was glad to see the President speaking over the weekend. Now he’s busy tweeting campaign messages,” said Biden.

.@JoeBiden: Trump should impose a “mask mandate” in "every federal building and facility” as well as
"interstate travel." pic.twitter.com/LgwTGt8iE8

“I would say this: Listen to the scientists, support masks, support a mask mandate nationwide, require masks in every federal building, and interstate travel!” he added.