A stunning chart published by the Epoch Times reveals the unbelievable Democratic plot to take down Donald Trump during the 2016 election; explaining in great detail their efforts to use “unofficial intelligence” and other “spy traps” to spy on the Trump campaign.

“Spygate will likely be remembered as the biggest political scandal in modern history,” writes the Epoch Times. “Obama administration officials actively colluded with the campaign of Hillary Clinton and foreign governments to affect the outcome of the 2016 presidential election.”

“Unofficial intelligence, spy traps, and a politically funded dossier were used to launch a counterintelligence investigation and surveil the campaign of candidate Donald Trump,” adds the chart.

View the stunning ‘Spygate’ chart below: 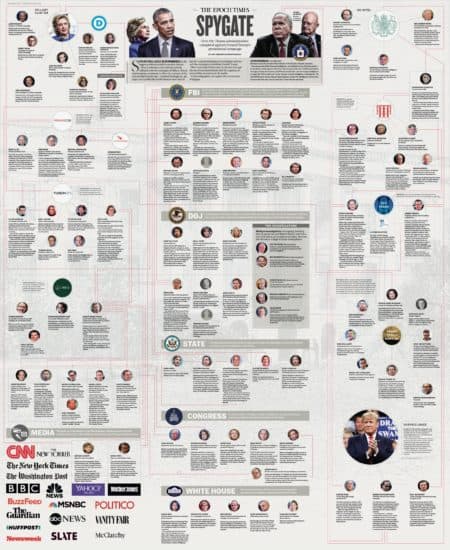 Former Speaker of the House Nancy Pelosi continued her all-out war against the House Intelligence Committee and President Trump Friday afternoon, telling reporters the President will spark a “constitutional crisis” should he use the recently released FISA memo to fire Deputy Attorney General Rod Rosenstein.

Pelosi addressed reporters just hours after Congressional leaders publicly disclosed the four-page document; showing the debunked ‘Trump Dossier’ was used by the FBI and DOJ to secure FISA warrants to spy on “at least one” senior Trump aide.

“With the memo… [Trump] has abdicated his responsibilities as Commander-in Chief to protect the American people by protecting our intelligence sources and the rest,” Pelosi told CBS News.

“If the President uses this fake, horrible release of distorted intelligence as an excuse to fire [Deputy Attorney General Rod] Rosenstein or [special counsel Robert] Mueller, it could lead to a constitutional crisis.”

The House Minority Leader’s fiery rhetoric comes on the heels of her official statement regarding the memo, where she bizarrely referred to the de-classified material as a “bouquet” from President Trump to Vladimir Putin.

An explosive new report from Sara Carter shows the FBI and the Department of Justice may have inappropriately coordinated with senior Obama officials in securing a FISA warrant against top Trump officials ahead of the 2016 race for the White House.

Newly discovered texts between anti-Trump officials inside the DOJ show a high-level of cooperation in obtaining a FISA warrant against former Trump associate Carter Page.

“Text messages obtained by investigators reveal that FBI Special Agent Peter Strzok and his colleague Lisa Page were discussing the FBI’s difficulty in obtaining the warrant to spy on Carter Page, who worked for a short stint with the Trump campaign. The FBI obtained its first warrant to spy on Page on Oct. 19, 2016, and there would be three subsequent renewals every 90 days for the warrant on Mr. Page,” writes Carter.

“The communications, which were first released last week and obtained by congressional investigators, occurred roughly one month before the Page warrant was obtained. The communications suggested that there was possible coordination by Obama White House officials, the CIA and the FBI into the investigation into President Donald Trump’s campaign,” she adds.