SMOKING GUN: See the Disturbing FBI Memo on Flynn, ‘What’s Our Goal? Get Him to Lie So We Can Prosecute’

An explosive report regarding the FBI’s investigation into former National Security Advisor Michael Flynn is shedding new light on the agency’s true motivation, with one memo asking “What’s our goal? Get him to lie so we can prosecute or get him fired?” 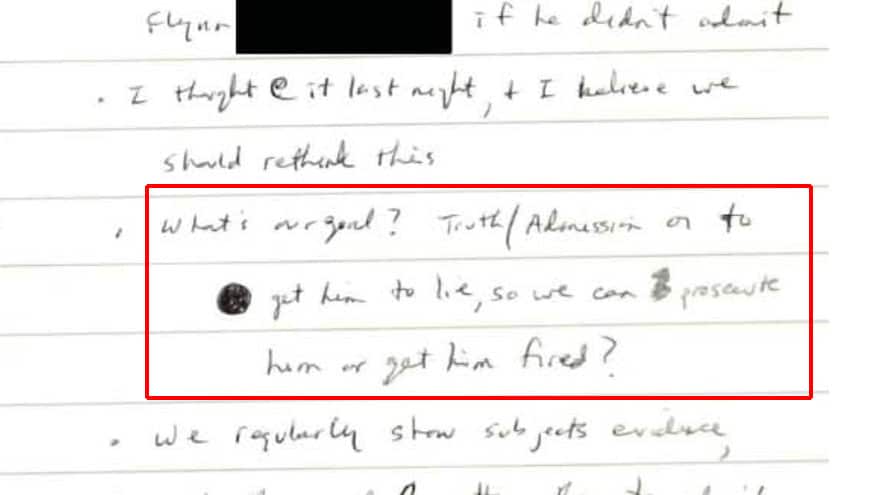 “What is our goal? Truth / admission or to get him to lie so we can prosecute him or get him fired?” We regularly show subjects evidence with the goal of getting them to admit their wrongdoing.”

“A senior FBI official’s handwritten notes from the earliest days of the Trump administration expressed concern that the bureau might be ‘playing games’ with a counterintelligence interview of then-National Security Adviser Michael Flynn to get him to lie so ‘we could prosecute him or get him fired,’” reports Just The News.

“The notes and other emails were provided to Flynn’s lawyers under seal last week and released Wednesday night by court order, providing the most damning evidence to date of potential politicalization and misconduct inside the FBI during the Russia probe,” adds the website.

“Multiple officials confirmed to Just the News that the author of the notes is William Priestap, the now-retired FBI Assistant Director for Counterintelligence and the ultimate supervisor for fired agent Peter Strzok, who led the Russia probe,” reports the author.

“House Judiciary Committee Democrats announced Tuesday that they plan to authorize subpoenas later this week for a dozen individuals connected to President Trump as part of the panel’s escalating probe into obstruction of justice, public corruption and other alleged abuses by the president,” reports Fox News.

“Today’s latest effort to relitigate the special counsel’s investigation remains unimpressive and unproductive. Mr. Mueller’s team issued more than 2,800 subpoenas before concluding that no Americans conspired with Russia. Even if Chairman Nadler still believes subpoenas are conversation starters, it’s hard to imagine this handful of subpoenas will do anything but reinforce the principal conclusions we’ve been able to read about for months,” Collins said in a statement.

“I remain open to reaching a reasonable accommodation and will not issue subpoenas if the information we are seeking is voluntarily provided,” Nadler said Tuesday. “We will get answers one way or the other.”

According to the Washington Examiner, “two sources” with inside knowledge of both Flynn’s conversations with the FBI as well as Comey’s testimony to Congress claim the former FBI chief told investigators that the bureau “did not believe” Flynn had either lied or was intentionally lying while speaking with agents.

“According to two sources familiar with the meetings, Comey told lawmakers that the FBI agents who interviewed Flynn did not believe that Flynn had lied to them, or that any inaccuracies in his answers were intentional. As a result, some of those in attendance came away with the impression that Flynn would not be charged with a crime pertaining to the Jan. 24 interview,” writes the Examiner.

The revelation raises serious questions over why Flynn was charged, and whether Robert Mueller’s ongoing witch hunt is desperately searching for inroads into President Trump’s inner-circle.

Read the full story at the Washington Examiner.