North Korea tested missiles and released official photos of the launch on September 15. Two deadly ballistic missiles can be seen launching from a train in the terrifying photos released by Rodong Sinmun, the official newspaper and state propaganda machine of North Korea’s ruling party. A North Korean statement claimed the missile testing was a success.

“In the early hours of the morning news broke the dictatorship had launched missiles from its east coast towards Japan. Japan’s Coast Guard confirmed that the two objects landed just outside their Exclusive Economic Zone (EEZ)” reports the Daily Star. 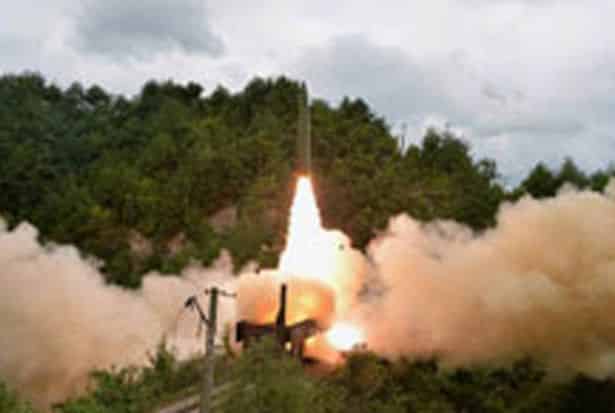 The official photos released were accompanied by a statement that read:

“The 8th Congress of the Party… organized a railway-borne missile regiment to increase the capability of dealing an intensive multi-concurrent blow at the forces posing threats to us at a time of conducting necessary military operations.

“The regiment finished rapid movement and deployment according to the norm of the operation and action procedures of the railway-borne missile system, and accurately struck the target in the East Sea of Korea according to the firepower mission.

“[Park Jeong-cheon said] the railway-borne missile system serves as an efficient counter-strike means capable of dealing a harsh multi-concurrent blow to the threat-posing forces through separate performances of firepower duty in different parts of the country.”

The Daily Star notes the “news comes amid a stalemate in talks between North Korea and the US, with negotiations regarding denuclearization on ice since 2019.” Kim Jong-un wants to be relieved of imposed US sanctions and has claimed he would scale down his weapons program in exchange.

“It is thought that these recent launches, along with the testing of less deadly cruise missiles over the weekend, could be an attempt to pressurize Joe Biden into making concessions,” writes the Daily Star.