NASCAR: More American Than Ever Thanks to Jeffrey Earnhardt and Nine Line Apparel

Just when you thought NASCAR and the auto racing industry couldn’t get any more patriotic, Jeffrey Earnhardt and Nine Line Apparel teamed up to raise awareness for U.S. service members, veterans, and their families.

It all began over Memorial Day Weekend during the Coca-Cola 600 at Charlotte Motor Speedway in Concord, N.C., when Nine Line emblazoned the names of 617 fallen servicemen on the hood of Earnhardt’s car. They raised over $15,000 for the non-profit Angels of America’s Fallen, which provides support to children of fallen military members and first responders.

“Jeff is probably one of the most humble, down-to-earth, and energetic guys I have ever met and he really cares about giving back to the veteran community”

For June 7th’s Coke Zero Sugar 400 at Daytona International Speedway, Earnhardt had the names of over 450 active duty military members placed on the hood of his car after Nine Line launched another fundraiser. The company sold apparel with a limited edition design titled, “Leave No Man Behind.” With each purchase of the design, customers were encouraged to submit the name of a U.S. service member to appear on the hood of the car. 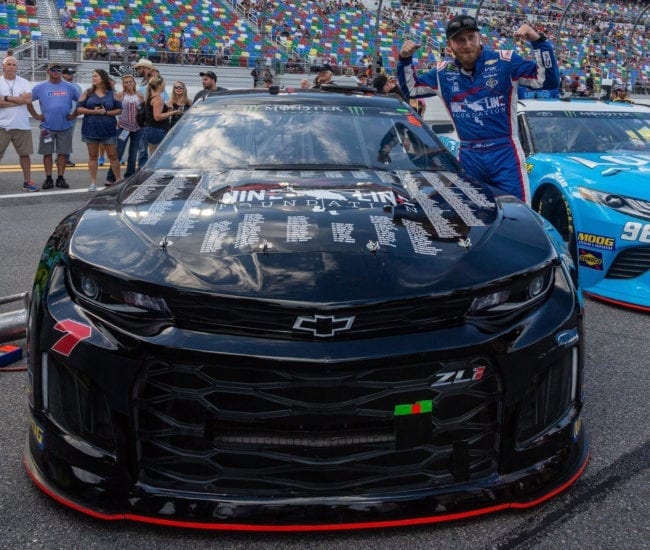 Earnhardt tells Hannity.com, “It’s an honor to be able to work with Nine Line and get to participate in a lot of the good causes that they stand up for and bring awareness to. They are an awesome company and do so much for our active military, veterans, and families.”

Proceeds from the “Leave No Man Behind” design sales (upwards of $20,000) went to the Nine Line Foundation’s Veterans Village initiative. In partnership with Georgia Southern University, Nine Line will construct a “transitional housing community” for homeless veterans in Savannah, GA.

The village will consist of 12 tiny homes which will provide temporary housing for homeless veterans. They will also be given job training to “help them break free of the cycle of homelessness.” Georgia Southern’s FORAM Sustainable Aquaponics Research Center will train the veterans in soilless farming techniques and provide them with the skills needed to obtain employment in the industry.

Tyler Merritt, CEO of Nine Line, tells Hannity.com that there are over 200 homeless veterans in Savannah alone and his goal is to eventually see the Veterans Village model replicated across the country. The foundation is currently $100,000 shy of the $350,000 needed to construct the village, which they hope to have completed by the end of February 2019. 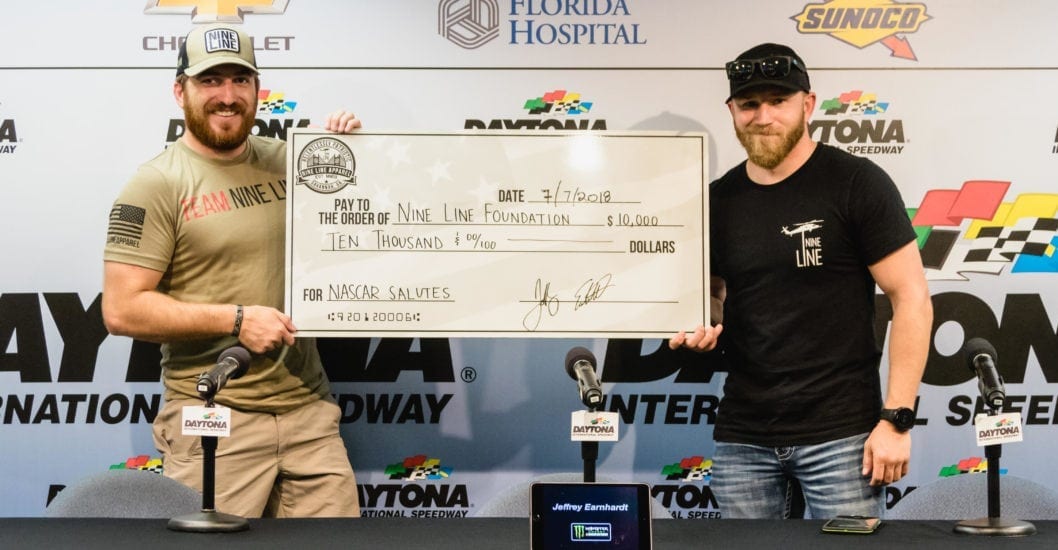 Connection with Vets and Military Families

Earnhardt’s cars for both the Coca-Cola 600 and the Coke Zero Sugar 400 were arguably the most red-blooded, all-American cars to participate in the races. With sponsors like Nine Line, Xtreme Concepts, Black Rifle Coffee Company and USCCA, it’s clear the 29-year-old grandson of the legendary auto racing driver, Dale Earnhardt connects with veterans and the law enforcement community.

When it comes to American service members and their families, Earnhardt says, “They are the true heroes of this country and I feel like if there is something I can do to support them, I will.” 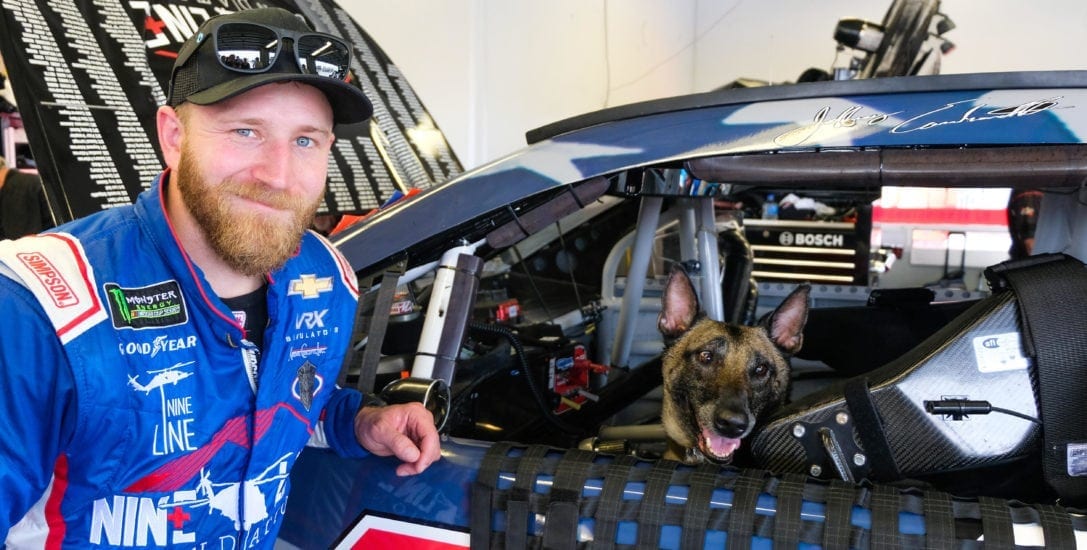 As if the Daytona fundraiser for the Veterans Village wasn’t enough, Earnhardt also teamed up with venture capital and defense company, Xtreme Concepts and presented emotional support dogs to four U.S. veterans. Recipients included a Marine who has three Purple Heart medals, and a retired Air Force medic.

Landon Ash, CEO of Xtreme Concepts, says he knew he wanted to further his partnership with Earnhardt after witnessing how the driver interacted with a Gold Star family during a dinner for potential sponsors. According to Ash, rather than focus on winning over possible investors, Earnhardt spent the entire dinner bonding with a young boy who had lost his father.

“You just don’t see that,” Ash said. “Any other driver in his situation would have been worried about sponsorship and what car they were going to have next year. You just don’t see celebrities have that kind of interaction with Gold Star families. The attention he gave that family is what won us over.” 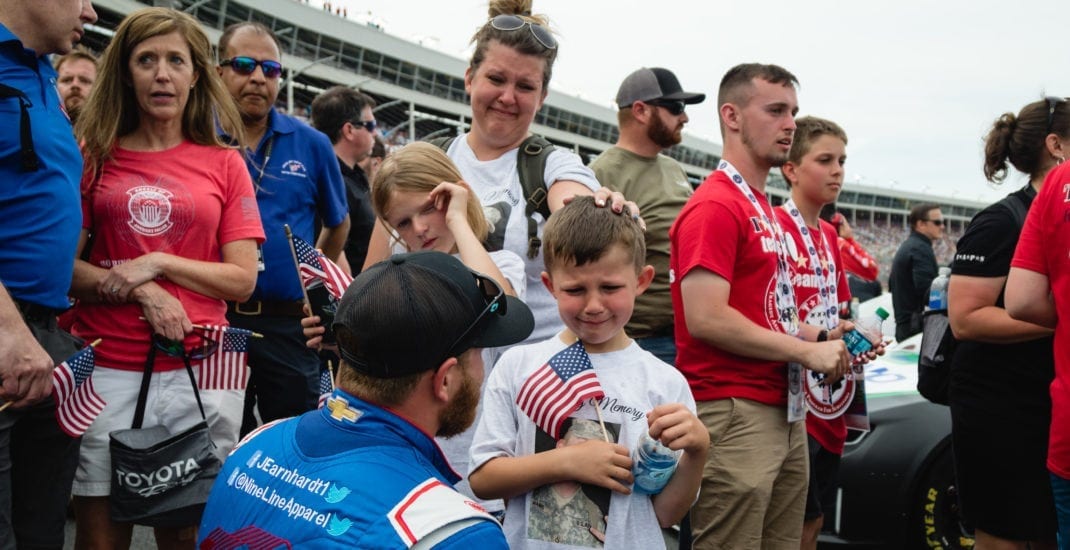 Nine Line’s Merritt has similar sentiments towards Earnhardt, telling Hannity.com, “Jeff is probably one of the most humble, down-to-earth, and energetic guys I have ever met and he really cares about giving back to the veteran community. He builds that authentic connection between those who serve and those who don’t.”

For more information on the Nine Line Foundation and their efforts, click here.