"Kyle went to Kenosha, Wisconsin to render medical aid as a trained ENT, not Portland, Oregon."

There’s no other way to put it: the President of the United States refused to disavow white supremacists on the debate stage last night. pic.twitter.com/Q3VZTW1vUV

“There’s no other way to put it: the President of the United States refused to disavow white supremacists on the debate stage last night,” wrote Biden on September 30th.

Joe Biden @JoeBiden medications have worn off. Once again, he confuses cities.

Kyle went to Kenosha, WIsconsin to render medical aid as a trained ENT, not Portland, Oregon.

“In light of the foregoing, I hereby demand on behalf of Kyle that Mr. Biden and his campaign immediately take down the video from all places that he has published it such that it can no longer be viewed… Immediately issue a full and fair retraction of the statement,” writes Wood’s letter.

Read the full document below. 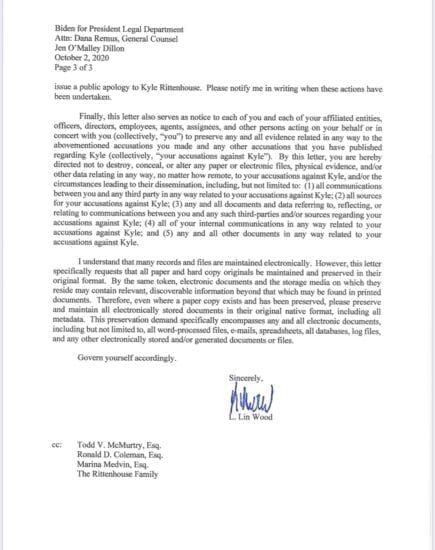 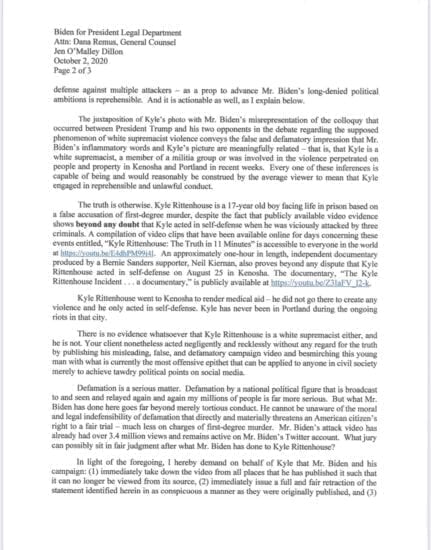 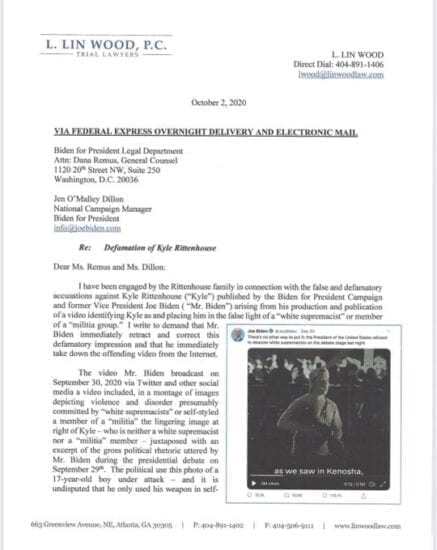 Police and protesters clashed in Kenosha, Wisconsin Monday night following a police shooting over the weekend; with eyewitnesses reporting “massive fires” burning throughout the city.

“Officers deployed tear gas in an attempt to disperse a crowd outside the Kenosha County courthouse. Gov. Tony Evers deployed 125 Guard members to the city in an effort to prevent the kind of violence and vandalism that occurred in the city on Sunday night,” reports Fox News.

Several massive fires in downtown #Kenosha. The city is filled with smoke.

“The unrest continued overnight, as video appeared to show a car dealership in Kenosha being looted, while others stomped on cars and pulled down street lights. Earlier, a furniture store was looted and set on fire. The Wisconsin Department of Corrections building was also reportedly set on fire,” adds Fox.

Police in Kenosha, Wisconsin are searching for a suspect who opened-fire during Jacob Blake protests overnight; killing two people and injuring another as civil unrest swept the city.

“Officers responded at about 11:45 p.m. Tuesday to reports of shots fired and multiple gunshot victims near 63rd Street and Sheridan Road. Two people were killed, and a third was rushed to the hospital with serious, but not life-threatening injuries, the Kenosha Police Department said in a statement,” reports Fox News.

“Videos on social media showed a chaotic scene after nightfall, as crowds seemed to chase a man carrying a rifle down the street, before eventually knocking him to the ground and trying to grab his weapon, Reuters reported. A bloodied man was seen with what appeared to be a serious arm wound. Another video showed a man with a head injury as crowds gathered around him to treat him,” adds Fox.

SPEAKER PELOSI: The President’s ‘Brazen’ Behavior was an ‘Invitation’ for CoVID-19
Advertisement