Although some people are natural orators, public speaking is certainly not something everyone is comfortable with. Even the best usually learn from others and practice frequently.

If you would like to become better on stage, in meetings, or with a crowd of people at a dinner party, The Mastering Presentation & Public Speaking Certification Bundle offers 51 hours of essential coaching in preparing, performing, and handling any anxiety surrounding your event. The training is worth $594, but Hannity viewers can pick up the bundle today for just $39.99 in a special deal.

Whether you want to succeed in politics or simply deliver better sales pitches at work, learning public speaking is a smart move. You can also use the same skills when you’re communicating in more natural ways, which can help with confidence and open lots more doors.

Through six courses from top speakers, this bundle helps you master the art of public speaking and presenting. Across engaging video lessons, you discover how to turn any script into a captivating story and create slides that keep people engaged.

The tutorials also look at techniques for overcoming fear, selling products without sounding “salesy,” and turning difficult conversations into productive ones.

Your instructors include Joeel Rivera, a counselor and workshop facilitator with a Ph.D. in psychology, and TJ Walker, who has taught these skills to top executives for 30 years. Between them, they have thousands of positive reviews from students. 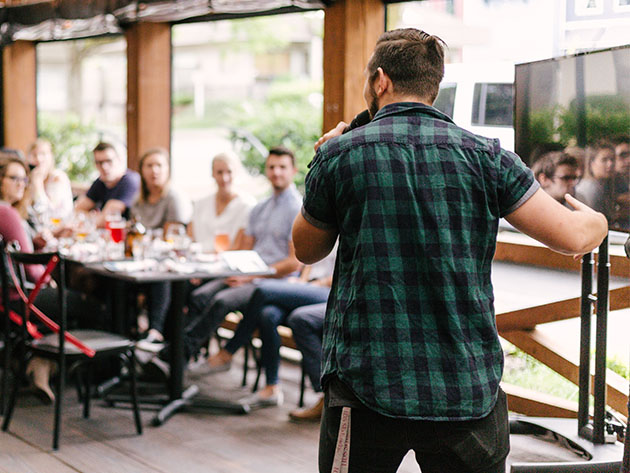 An explosive report from JustTheNews.com is shedding new light on Hunter Biden’s dealings during the eight years of the Obama administration; showing the Vice President’s son was provided a Secret Service security detail on hundreds of flights.

“Hunter Biden has already made headlines with his pursuit of global business, raising questions about conflicts of interests by landing lucrative deals in Ukraine and China while his father Joe was vice president,” reports JustTheNews.com. “And now it’s his proclivity for globetrotting travel that is garnering attention.”

“The son of the former vice president and 2020 Democratic presidential nominee in waiting used Secret Service protection on at least 411 international and domestic trips during the Obama years, according to records released this month under the Freedom of Information Act to the conservative watchdog Judicial Watch,” adds the website.

Read the full report at JustTheNews.com.

BIDEN GOES OFF: Joe Snaps at Reporters for Asking Questions About Hunter Biden

Former Vice President Joe Biden snapped at journalists on the campaign trail in recent days, with reporters increasingly asking questions over his son Hunter’s overseas business deals -particularly in regards to the Ukraine.

“I wonder whether you have a comment on this report on a court filing out of Arkansas that your son Hunter just made you a grandfather again,” asked Fox News Channel’s Peter Doocy.

“How many times have you ever spoken to your son about his overseas business dealing,” asked another reporter.

“Here’s what I know. I know Trump deserves to be investigated, he’s violating every basic norm of a president!” Biden deflected.

Watch Biden snap at reporters above.